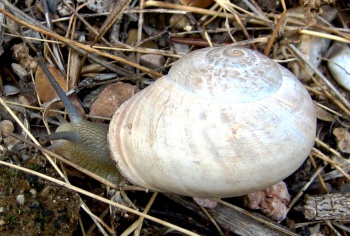 Snails don't often make the top of favorite food lists, but for early humans the slow-moving mollusks added diversity to their diet. At the Cova de la Barriada site in Spain, archeologists have discovered the earliest known evidence of snail consumption. People living along the Mediterranean coast in Africa and Europe were eating snails 20,000 years ago, but the Cova de la Barriada site is 10,000 years older. Archaeologies excavated 112 complete shells and hundreds of shell fragments of just one species, the large land snail Iberus alonensis, from a 30,000-year-old cooking pit. Charcoal in the cooking pit suggests that the snails were roasted on embers from pine and juniper wood before being eaten.

Lead study author Dr Javier Fernández-López de Pablo told the BBC that the fossils at Cova de la Barriada are "clearly the oldest record [of snail consumption] we have so far." The study, published August 20 in the journal PLOS ONE, presents the evidence that the snails were gathered and eaten by humans and not brought to the site by birds or small mammals. The patterns of damage on the fragmented shells are different from the patterns left by birds like blackbirds or parrots, and the shells do not show the typical gnawing patterns of rats or mice. Birds and small mammals can and do produce collections of shells, but usually of many different snail species. The presence of only a single snail species at the Cova de la Barriada site supports the conclusion that it was humans gathering the snails as a food source, and the consistent size of the shells suggests that only adult snails were eaten. This would help prevent overharvesting of the snails and keep them a sustainable food source in the area. The fact that the snails were found in and around a fire pit, which shows evidence of many controlled fires, further supports the theory that this site is evidence for human consumption of snails.

Other bone evidence at the site shows that the early humans living at Cova de la Barriada also ate rabbit, red deer, Spanish ibex, horse and aurochs. Today, snails are considered a delicacy in Spain. At the yearly L'Aplec del Caragol festival in May, tons of snails are eaten. Other modern snail dishes include the French appetizer escargot, where the snails are cooked in garlic butter or wine. Have you or would you ever eaten snails? I tried them once in a rather forgettable and chewy pasta dish. I think I'd rather chow down on honeyed locusts.