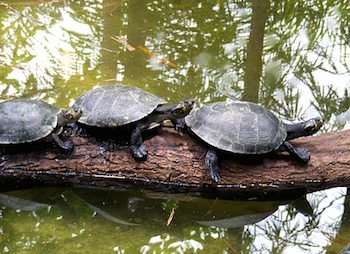 Researchers managed to record distinct sounds from turtles that the reptiles used to communicate.

Brazilian scientists have managed to record instances of verbal communication in river turtles. These recordings have unveiled a previously undiscovered factor in the reptile's nesting season, in which they exchange information vocally using at least six different sounds. This also included chatter between females and hatchlings. According to the researchers, this is the first documented case of parental care in turtles.

The team, which included researchers from the Wildlife Conservation Society (WCS) and the National Institute of Amazonian Research conducted their study on the Trombetas River in the Amazon between 2009 and 2011. The equipment used included microphones and underwater hydrophones, which recorded more than 250 individual sounds from the turtles. The scientists analyzed these vocalizations and divided them into six different types, linking each category to a specific behavior.

The noises made by the animals were subtly different depending on their behavior. An example of this was seen when the adults used a specific sound when migrating through the river, and another when they gathered in front of the beaches where they had nested. A different sound was made by adult turtles as they waited on the beaches for their hatchlings to arrive.

Dr Camila Ferrara, a member of the WCS Brazil program, believes that the females make these specific sounds to guide hatchlings to and through the water. "The females wait for the hatchlings, and without these sounds, they might not know where to go," she said in an interview. "We think sound helps the animals to synchronize their activities in the nesting season." Due to the relatively long life span of turtles, the researchers also think that young turtles might learn these vocal communication skills directly from older individuals in their population.

The results of the study were recently published in the scientific journal Herpetologica, and include recordings of the turtle vocals (which can also be found on BBC News). Because of the importance of this newfound behavioral trait, the scientists warn of the potential damage noise pollution could cause to the turtles.

Give us your thoughts about this story in the comments, and follow The Escapist for more stories about animals and their ability to communicate!