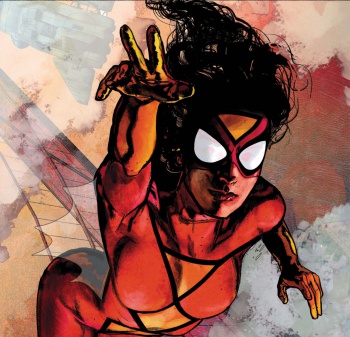 Tom Brevoort figures if you hire someone like Milo Manara, you know what to expect. But was Marvel paying attention to its readership?

Spider Woman recently garnered Marvel a lot of negative publicity, thanks to a Milo Manara variant cover that many regarded as less than suitable. Marvel VP Tom Brevoort took a question on his Tumblr on this issue. Wasn't this negative reaction a form of conservatism, the questioner asked, evidently afraid that sexual thematics would be removed from comics.

Tom Brevoort's response in full is:

Well, I think a couple of things.

I think that the people who are upset about that cover have a point, at least in how the image relates to them.

By that same token, Milo Manara has been working as a cartoonist since 1969, and what he does hasn't materially changed in all that time. So when we say 'Manara cover', his body of work indicates what sort of thing he's going to do.

It's also, for a Manara piece, one of the less sexualized ones, at least to my eye. Maybe others feel differently. But given that the character is covered head-to-toe, and is crouched in a spider-like pose, it seems far less exploitative to me than other Manara pieces we've run in previous months and years.

But all that said, it's the right of every reader not to like something.

And fortunately, it's a variant cover, so people will likely need to seek it out if they want it, rather than it being the display piece for the book.

I think a conversation about how women are depicted in comics is relevant at this point, and definitely seems to be bubbling up from the zeitgeist. That too is fine. Nothing gets better unless ideas are communicated.

In previous years, if Marvel took flak on an issue it could count on the usual internet suspects weighing in. This time it's getting attention from the likes of Time, Hollywood Reporter, and Guardian, news outlets that until relatively recently wouldn't have bothered about what happens in comic books.

Then Marvel had a string of hit movies. Marvel Comics started encouraging its female readership, even announcing a female Spider-Man spin-off movie, and with good reason.

"If you go to conventions and comic book stores, more and more female readers are emerging," said Marvel's Axel Alonso. "They are starved for content and looking for content they can relate to." Market research indicates that, of the 24 million comic fans in the US, 46.67% are women. That's 11.2 million readers, looking for characters whose adventures they can enjoy.

Given the increased number of female readers, and given the attention Marvel's been getting from major news outlets thanks to its movie hits, maybe now wasn't the best time for a Manara variant cover. But at least the conversation's happening; after all, nothing gets better unless ideas are communicated.