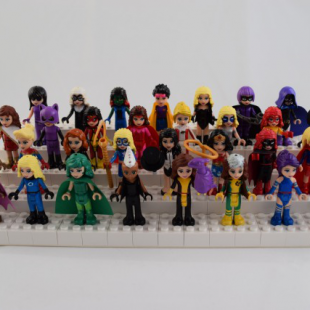 Launched in 2011, the LEGO Friends line was created to help draw young girls into buying and playing wit the company's famous construction toys. It was an almost instant success, earning the company oodles of cash that drew in droves of young girls eager to play with sets being marketed directly at them. For some however, the line was as also a point of ire, sullying the previously gender neutral LEGO bricks with its pastel colors, doll-like minifigures and frequent adherence to gender stereotypes. That in mind, LEGO fan Jon Lazar set out to re-purpose the Friends to create new minifigures rooted less in shopping malls and modeling and more in saving the world.

"I began the project surreptitiously by posing the question 'Who is your favorite super heroine?' on my social networks," explained Lazar in a recent blog post. "Once I began creating the custom minifigures, I made sure that each fit into the role of super heroine (as some people did request villains), that no character would be repeated in alternate costumes, and that I would release one per day for the entire month of July."

Dubbing his creations the LEGO "Super Friends," Lazar succeeded in hitting his goal of creating a unique minifigure each day. The end result is a collection of 31 plastic superheroines hailing from both the DC and Marvel universes. Their ranks include characters like Batgirl, Wonder Woman, Spider-Woman, Phoenix and Sue Storm, as well as an array of other characters both well known and obscure.

Not surprisingly, Lazar's line gained a substantial following from LEGO and superhero fans who understandably wanted to see more. Lazar, in turn, intends to continue creating new figures on a weekly rather than daily basis and has also begun selling his custom creations on his Etsy page. Just personally, this is something I think the LEGO Group should be doing itself, but until that happens I can be content with Lazar's work. Take a peek at it yourself and let us know what you think.