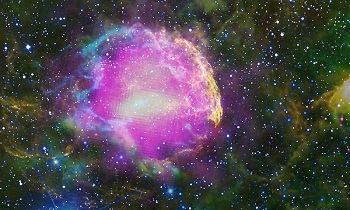 The remains of a supermassive star dating back to the formation of our universe may have been found inside a star at the edge of the Milky Way.

Astronomers may have identified one of the universe's oldest stars that went supernova many years ago. This celestial body may have contained a mass almost 100 times greater than that of our own Sun (which happens to be 1.9891 times 10^30 kilograms).

Japanese astronomers who made the discovery believe that the cosmic dust left over from the star's explosion may have assisted in the formation of another one of nature's giant nuclear fusion machines. SDSS J001820.5-093939.2, which is located near the site of the first body in a stellar halo around the Milky Way, has an unusual chemical composition that contains a low amount of metals. Some astrophysicists theorized that stars with this specific kind of composition were catalyzed by the supernovas of supermassive stars.

The team from the National Astronomical Observatory of Japan utilized the Subaru Telescope in Hawaii to examine this star and search for clues regarding how it was formed. Since early massive stars had such a short life span, studying objects nearby is the only way to find evidence of their existence. "The impact of very-massive stars and their explosions on subsequent star formation and galaxy formation should be significant," said Wako Aoki, lead author of the astronomers' initial findings. "The low abundance of heavy elements suggests that this star is quite old - as old as 13 billion years."

First-generation very massive stars were formed during the early days of the universe, and lived extremely short lives before dying. Known as Population III stars, They were created from the hydrogen and helium that comprised nearly all matter in the early Universe. After burning at extremely high temperatures during their short life, they exploded and spewed forth the material that eventually created more stars.

Interested in more news about space and astronomy? Look no further, because The Escapist has you covered.