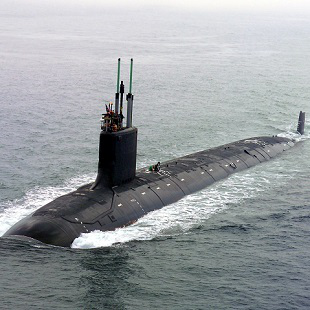 Researchers at the Harbin Institute of Technology want to send submarines on a supersonic voyage that would cover Shanghai to San Francisco in under two hours.

The Heilongjiang-based Institute's Complex Flow and Heat Transfer Lab is working on sub designs that would allow underwater craft to travel at the speed of sound, or over 3,500 miles per hour (and that is not a typo -- sound travels significantly faster in water than in air).

How would this be possible? Water produces more drag on a moving object than air, so the trick is to surround a submarine in an air bubble. This "supercavitation" technique would offer the drag/friction benefits of air, all while remaining under the ocean's surface.

This is all still very much in the R&D phase. Supercavitating torpedoes do exist, dating back to Russian research in the Cold War. But current subs and the majority of their armament are still limited by the drag of the briney deep. Other issues with such travel include the necessity of a fast launch, as well as steering difficulties. The new research claims to address these problems.

"Once in the water, the team's supercavitation vessel would constantly 'shower' a special liquid membrane on its own surface," says the SCMP report. "Although this membrane would be worn off by water, in the meantime it could significantly reduce the water drag on the vessel at low speed."

The membrane would also help with steering, thanks to its controllable affect on drag.

This all definitely has a military feel to it, but if commercial travel could achieve such speeds? That's a game-changer.