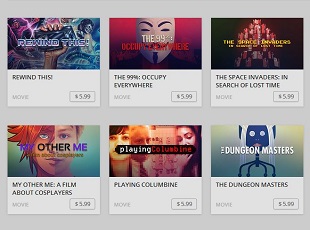 We OWN the DRM-free picture business in this town, kid.

Update: GOG isn't the only game-centric distributor getting all starry-eyed for the silver screen. Three of the DRM-free movies available for purchase -- Pixel Poetry, Good Game, and the The Art of Playing -- come from none other than Devolver Digital Films. Come for the Hotline Miami, stay for the eSports hijinks.

Original Story: GOG.com has long been known for its vast library of DRM-free games for Windows, Mac, and Linux, but the online distributor is now forging into unknown territory: The movie business.

Starting today on its freshly redesigned mobile-friendly website, GOG.com is selling DRM-free movies, and flicks can be streamed or downloaded. 21 titles are available for purchase, with two free movies available for testing. "Art of Playing" and "TPB AFK: The Pirate Bay Away From Keyboard," are available to all, gratis, so you're familiar the DRM-free experience before dropping cash on subsequent titles.

The GOG movie vault is admittedly limited at the moment, as bigger partners have spurned the model until positive results are seen. "In our first round of talks, the response was largely, 'We love your ideas, but we do not want to be the first ones. We will gladly follow, but until somebody else does it first, we do not want to take the risk'," said GOG North America VP Guillaume Rambourg (undoubtedly while smoking a Churchill stogie, and peering into an old-timey film-editing machine). "Most studio officials agreed that DRM is pointless, but were quick to add that the lawyers would not allow them to get rid of it."

For now, the library is limited to "documentaries catering directly to [GOG's] existing community: gamers and geeks." Other titles available include Indie Game: The Movie, Rewind This!, Playing Columbine, and The King of Arcades. Most of the collection sells for $5.99 a pop, but Indie Game: The Movie will run you $7.49.

Fingers crossed that the movie experiment gains traction for this Hardy to Steam's Laurel. Today, Indie Game: The Movie. Tomorrow? RoboCop! Or Sex in the City 2!