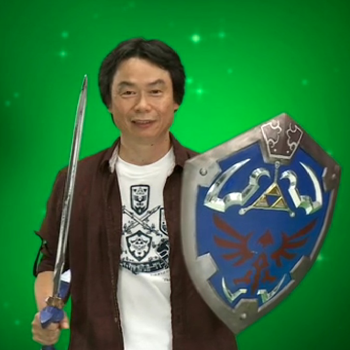 Miyamoto explains why Nintendo will focus on the hardcore gamer, and why he believes the mindset of the passive player is pathetic.

Nintendo is often criticized for not catering to the hardcore demographic, and Shigeru Miyamoto, beloved game designer and General Manager of Nintendo EAD, agrees the company should focus on dedicated fans. In an Edge magazine interview Miyamoto expresses his dissatisfaction with the average mindset of the passive gamer.

"[These are] the sort of people who, for example, might want to watch a movie. They might want to go to Disneyland," he begins, "Their attitude is, 'okay, I am the customer. You are supposed to entertain me.' It's kind of a passive attitude they're taking, and to me it's kind of a pathetic thing." He continues that, "They do not know how interesting it is if you move one step further and try to challenge yourself [with more advanced games]."

CVG points out that this is the first time a Nintendo executive has made a public statement of the company's initiative to focus less on the casual market. He also divulges this is in part to the growing popularity of the mobile division, "Fortunately, because of the spread of smart devices, people take games for granted now. It's a good thing for us, because we do not have to worry about making games something that are relevant to general people's daily lives." He confirms the DS and Wii were Nintendo's effort to "expand the gaming population," but now it seems the mobile gaming market has taken over that initiative.