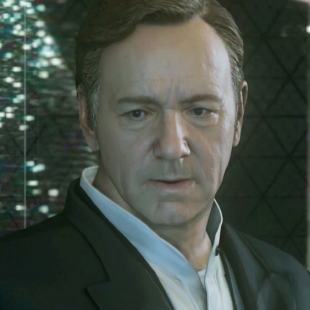 The problem with producing a Call of Duty game every year? Coming up with a compelling, and reasonably realistic, world for the plot to operate within. It's easy enough when you're focused on World War II, the Cold War, or even conflict with Russia, but dropping characters into a "realistic" world 40 years in the future is easier said than done.

This problems is why Sledgehammer Games brought in a "scenario planner" from the DoD to help build out the conflict for Call of Duty: Advanced Warfare. Outlined in a feature by The Guardian, Sledgehammer wanted its future-shooter to be, on some basic level, grounded in reality.

"...we got together with a scenario planner from the department of defense, who is active in the Pentagon," said Sledgehammer co-founder Michael Condrey. "His job is to think about future threats and prepare 'what if' scenarios for the US government. So we asked him, what do you think will be the conflict of tomorrow?"

The use of this scenario planner is why COD: AW has private military companies in the plot crosshairs, along with tech like directed energy weapons, and exoskeletons. If the latter are already being used in shipyards halfway across the world, imagine how they will look and operate only a few decades from now.

This isn't the first time a Call of Duty team has turned to military or third-party experts for assistance -- famed defense/security expert P.W. Singer was a consultant on Black Ops II -- but I'm not sure if the expert-level involvement has ever been this deep.

And let's be clear: By no means is Advanced Warfare going to be a shooter grounded in reality, but using futuristic version of technology, platforms, and military strategy that already exists should make for an experience that doesn't leave you laughing in disbelief at every turn.