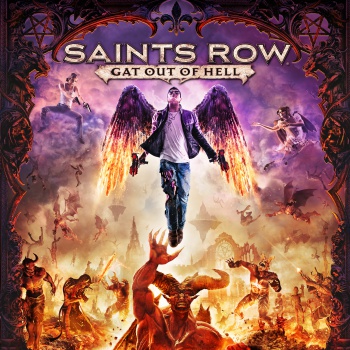 The gang from Saints Row channels Disney by battling Satan with a talking gun and terrifying musical numbers.

The Saints Row series has gotten more and more absurd as it has progressed, so it kind of makes sense for the characters to go full fantastical. At the Volition panel at PAX Prime this morning, Lead Writer Steve Jaros and the rest of the team announced a standalone expansion called Saints Row: Gat Out of Hell. Over the course of a 6-8 hour romp, you can play as Johnny Gat or Kinzie Kensington (or both in 2-player coop) as they both travel to the city of Hell to save the soul of the boss of the 3rd Street Saints from Satan. The expansion will cost $19.99, and it'll be available on January 27th 2015 on Xbox One, 360, PS3, PS4 and PC. The release of Gat Out of Hell coincides with Saints Row IV: Re-Elected for the Xbox One and PS4 to make a nice package for those who have moved on to new consoles.

Gat Out of Hell sounds like something you don't want to miss, though. I got to speak with Jaros before the announcement and he was audibly excited to show off his version of the classic Orphean myth of traveling into Hades. There's also some comparison to Dante's Inferno as Jaros said you'll be able to meet characters from past games in the series to have some closure. There's also a full musical number. Basically, it sounds insanely fun.

"It's very much an over-the-top crazy adventure where Johnny Gat goes into hell," Jaros said. "You tear up Hell. It's an open world sand box you have lots of different activities and diversions to go play in to try and take over the city."

I learned at the Escapist Expo last year that Jaros shares my background in theater, and we nerded out talking about the silly references in his games. Little did I know that while Jaros was in Durham for the Expo, he was actually writing a full musical number that appears in Gat Out of Hell. "I was actually at the Escapist Expo and I was writing the musical in my hotel room and I'd be walking around the halls of the Escapist [Expo] singing the song in my head," he told me. "It was fun - it was a labor of love."

The song occurs about halfway through the main story of the game and serves to introduce the Satan character to the player. The number is probably more Disney-inspired than a true Broadway style song. Jaros said the story is told by Jane Austen (as in Saints Row 4) but steals many cues from animated films. "It's not like a Disney parody or anything like that, but it's inspired by some of the tropes. For instance in a Disney movie there's usually a talking animal companion - there'll be some mice, Sebastian in The Little Mermaid. In our game it's a gun. Johnny Gat has a talking gun that keeps him company."

In your adventures through Hell, you'll also gain supernatural powers similar to how you gained superpowers in Saints Row 4 except now you'll have a dark angel's wings or be able to summon imps to fight for you. There's also special weapons for each of the seven deadly sins. "Tell him about the armchair," prompted Aubrey Norris, head PR for Deep Silver.

Is the sloth armchair weapon funnier than the dubstep gun from SR4? Only time will tell.

Check out my full interview with Steve Jaros here where we discuss the transition Saints Row has taken since its first iteration in 2006 to the present and the objectification of women both in his games and the industry.

I'll also be playing through a portion of Gat Out of Hell at the Volition booth during PAX so expect a full preview on what to expect from the standalone expansion to be published this weekend.