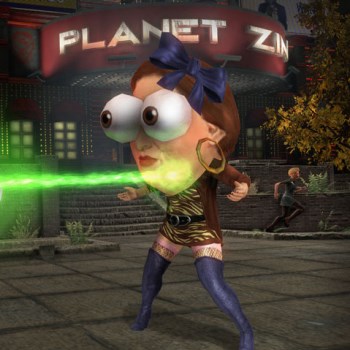 Steve Jaros from Volition said he thinks Saints Row has gotten better in representing women over the course of the series.

There is a lot of talk these days about how women are portrayed in video games. The video series Tropes Vs. Women in Video Games by Anita Sarkeesian has shown through many examples how patterns exist in today's games which continue the cycle of portraying women as objects to be gained or, perhaps worse, as sexy, gritty background. The latest episode Sarkeesian's series sparked support from gaming leaders such as Tim Schafer from Double Fine. In discussing the latest Saints Row announcements with Steve Jaros, Creative Director at Volition, I asked him how he thought his games portrayed female characters considering that the original Saints Row was one of the games used as an example in Sarkeesian's latest episode about women used as background objects in games. Jaros said that he thinks they've been doing a better job with each sequel, but admitted there may have been some missteps earlier in the series.

"I actually tweeted out the link to the video yesterday about women as background objects and said that every game developer should watch this and sometimes is guilty of it," he said. "I think that [Sarkeesian's] right in that case."

He affirmed that the way women are portrayed in the medium could be improved. "I think that it is a problem in the games industry. I think that we shouldn't be portraying senseless abused women and I think that if I could go back and hop in a time machine I would have done things differently. But there's also some things I didn't any control over and also I think that people's consciousness grew." Jaros mentioned that the first Saints Row came out in 2006, and the awareness of these kinds of issues has grown remarkably in the last 8 years.

In the games he could influence at his studio, Jaros said that he believes Volition has done a decent job at being aware of how women are shown in their games. "I think that there's some things Saints Row does better than other games, and I think that there are other things that we could have done better," Jaros continued. "I think that every time that we've done a Saints Row game we've gotten better at it. I think that we always wanted to make sure we do things with fairness, but we've gotten better at it as time goes on."

He pointed to a few recent examples of small ways he has tried to portray women in a more positive light. "It's very minor but it means something to me. We never call a woman a 'ho' in Saints Row 4, we call them sex workers. We respect that that's their position and we don't take a cheap shot at them for that. It's a minor thing, but it's something ... It's the right thing to do."

Jaros also believes that the way major speaking characters are dressed is important, and that the team struggled with how best to represent them. "There's a reason that none of the Saints Row characters ever get naked, it's a conscious choice," he said. "Viola and Kiki are sex workers in Saints Row 3, but they are the most covered up characters. They're wearing turtlenecks, leggings and a skirt over leggings. They don't show an inch of skin, and it was by design, because we didn't want to sexually objectify them."

Even in the more sci-fi Saints Row IV, Jaros debated how best to show Kinzie Kensington's powerful self in the virtual reality simulation of the game. "A great debate that happened in the studio," he said. "In Saints Row 4 she gets her superhero Matrix-ey outfit, [and we argued] about whether that was too provocative for Kinzie. 'Is this the right expression of the character? Is this fair? Do we think this is right?'"

Jaros does not dodge that earlier Saints Row games definitely showed a large amount of violence against women - the Brotherhood storyline in Saints Row 2 is a particularly memorable example. He accepts the criticism with aplomb that many of Sarkeesian's detractors could emulate.

"I think it's fair to be called out on your shit," he said. "I think that it's a sad man that can never be self-reflective. I think that we tried to go and carry ourselves with respect, and try to respect sexuality and respect gender as much as we can, and sometimes we fail but hopefully we'll do better and continue to get better."

I think that's all anyone can ask.

For more insight in how Saints Row has developed and changed over the course over the series, not to mention the weird wacky stuff in store in the newly announced standalone expansion Gat Out of Hell, check out the full interview with Steve Jaros here.

The Salt Must Flow! The Wooster 478 Comments

Critical Intel: A Saint In The White House: The Campaign Trail Robert Rath 24 Comments
Comments on