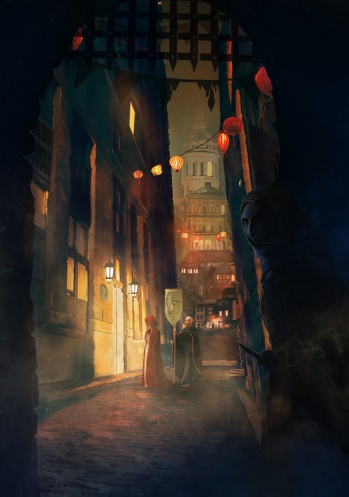 Stealth action is a rare genre for roleplaying, but Dark nails the aesthetics and feel.

Stealth action roleplaying game Project: Dark quickly caught our eye when designer Will Hindmarch brought it to Kickstarter, and he's been hard at work on it all year. It's a multi-genre roleplaying system driven by playing cards, meant to be used in one of three settings: Elizabethan Fantasy, Espionage Cyberpunk, and Sci-Fi Revolution. Those three settings, Dark, Dark|Net, and Dark Planet, make up the core of what Hindmarch is calling a love letter to stealth video games like Thief: The Dark Project. (I'm sure I don't have to point out the naming homage to you, at the very least.)

I had a chance to sit down and play a session of Dark with Hindmarch at PAX Prime 2014, to see how his work on stealth roleplaying has progressed since over 2,000 people backed his Kickstarter. The adventure I played was with what he considered starting characters, and is available to those who backed the Kickstarter. It was the story of the infiltration of a place called Alveswick Manor, which a noble lady - through her servant - had asked our band of thieves to sneak into. Our task? To discover what the Lord Drury was digging up beneath his family's ancestral home.

Each character was made up of some part of a deck of playing cards. Those cards were the Ace, two, three, and four of each suit, along with a number of higher value cards added through customization. Each suit mapped to one of the game's four ability scores: Guile, Mettle, Force, and Finesse. Some of those cards gained special powers for specific character - for example, my character bruiser character Bronham's king of clubs (Force) was the Takedown King, and when played properly allowed him to execute a brutal murder of a tough enemy or an Assassin's Creed-style simultaneous takedown of two enemies at once. My associate Crowford's queen of diamons was an ability called Expert Fence, and allowed us to get far more value out of looting a treasure room than a less educated thief might get. Characters also added more generally useful cards - the six through ten of their favored suits - to their decks with experience. Once assembled, your deck was your character and vice versa. As you drew cards from your deck you knew what you had available to you. It was a satisfyingly gamey element, giving a lot of resource management and deckbuilding considerations to how you chose to play.

To take actions in the game, you played series of cards from your hand. Your hand size was determined by how well hidden you were. A thief in pitch darkness had six cards in their hand, while a smoky corridor filled with oil lamps would give you three. That number was referred to as the stealth level, and had several game effects - including what the game master had to roll equal to or higher if you just chanced an action and went for it without trying to be sneaky. To make an action generally, you gamemaster told you what suit was appropriate - Force for fighting - and you told the gamemaster another that worked for what you explained you were doing. For example, I add Diamonds to an action breaking a lock because I know where the weak spots on that kind of lock were. You then play cards from your hand until you think the total you've got is high enough to meet the secret goal of the task - usually something between 2 and 12. If you play suited cards, you get to keep playing, but if you play an unsuited card you have to stop playing. 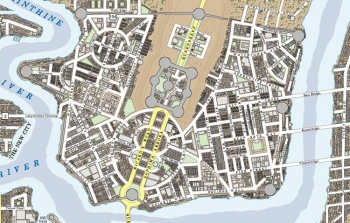 The game opened with an extended multi-night scene as our characters utilized their skills to case the target house. Our historian character dug up some family history that the Drurys had with the faerie kingdoms. Our engineer character found out that the guildsmen who were digging underneath the house had been recently fired after uncovering a new chamber. The casing process was simple - you just told the gamemaster you had so much talent in say, Engineering or Fellowship and were rewarded with a set of information. Our casing complete, we jumped to the evening of the job and started chewing through the house. The infiltration was quite fun, and incredibly tense. We knew that the House's cards could cut our crew of thieves - even my badass warrior - apart because they had both numbers and armor on their side. On the other hand, we owned the dark, and if someone crossed our path there I could easily take them down. Our face-man social character conjured up a priest's disguise, beguiling and distracting several servants with the story that he was here to consecrate "the new basement" - all the while the other characters slinked by while the servants' backs were turned. Every play of cards felt like a chance for something to go horribly wrong, because each time we took a "turn" we gave the gamemaster a chance to do the same, tracking the pre-mapped patrols of the guards and the actions of the servants. Eventually we made it to the basement - looting a pantry full of priceless spices on the way. I won't spoil what we found there, as Alveswick Manor will be a published adventure for Dark some time in the future, but I can say that it made me more confident and interested in the early renaissance aesthetic that Hindmarch is cooking up.

The demo I played was a really satisfying game, with a tight feel and a tense play. The playing card aspect felt like sometimes it dictated how you played your character, but in the end you were really just living up to the kind of person you had made. The game shows early promise, but we won't know for sure if it can deliver the same tension and excitement through long term play - which it intends to with rules for the folks hunting the thieves as they become more and more notorious. Dark is expected to finish development and be commercially available both electronically and in print in Quarter 1 of 2015.