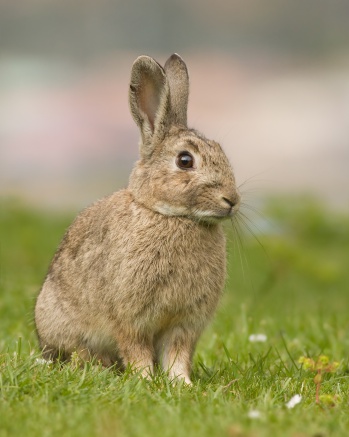 Scientists find wild and domesticated rabbits aren't as genetically different as we thought.

Humans have been domesticating animals since as early as 15,000 years ago, and while we can observe the differences domestication makes, the underlying genetic changes are poorly understood. A dog is clearly different from a wolf, but how the wolf's genome changed on the way to becoming shih tzus, corgis and pugs is difficult to study. Rabbits, which were first domesticated just 1,400 years ago in monasteries in France, make an ideal subject for studying the genetic transformation from wild to tame. The domestic rabbit's ancestor, the wild European rabbit, Oryctolagus cuniculus, still exists in dense populations in Europe. Scientists compared the genomes of wild rabbits to six different breeds of domestic rabbit. The study, published August 28 in the journal Science, found that wild and tame rabbits didn't carry different genes, but rather different frequencies of the same genes.

"Our data shows that domestication primarily involved small changes in many genes and not drastic changes in a few genes," says co-senior study author Kerstin Lindblad-Toh, Director of Director of Vertebrate Genome Biology at the Broad Institute of MIT and Harvard, professor at Uppsala University and Co-Director of Science for Life Laboratory. Complete genome sequences were completed for wild rabbits at 14 different places in Europe and six domestic breeds. The study observed few examples where a domestic gene variant has completely replaced the wild variant, and no instances where a gene had been completely inactivated. Domesticated rabbits instead had different numbers of genes that were already present in the wild population. The study found that the most important changes were in the genes affect the development of the brain and nervous system. Changes in these genes are responsible for the difference in personality and behavior between wild and tame rabbits. Wild rabbits are quick to bolt, a flight response that helps them avoid predators like hawks, eagles, and foxes. Domestic rabbits have a much weaker flight response, a fact that Charles Darwin used in On the Origin of Species as an example of changing an organism's traits by selection.

The study concludes that instead of a few key "domestication" genes, the genetic process for taming wild animals involved many small changes in the genome. Wild rabbits have many gene variants, and the process of domestication increased the frequency of the gene variants that produced desirable characteristics, like size, color, and a suppressed flight response.

Having had a pet rabbit fall asleep in my lap while browsing the internet, I can confirm, at least anecdotally, that tame rabbits have very different personalities than wild. Have you ever had a pet rabbit?