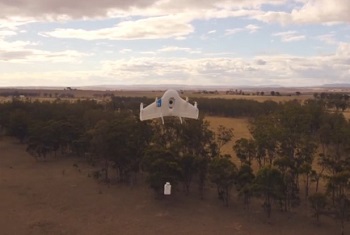 Google attempts to break in to the transportation and delivery field with a drone program that has been under wraps for years.

Google has unveiled "Project Wing" to the public as a program that aims to use self-manufactured prototype drones to deliver emergency aid and commercial goods worldwide. Kept in secret for two years, this project is already drawing comparisons to Amazon's Prime Air, which is still in developement.

A video posted on their personal YouTube channel demonstrates how their delivery process works by showing a drone delivering dog treats to a remote farm located in Queensland, Australia. According to Astro Teller at Google X, the drones aim to remove the remaining friction from transporting goods and services around the world by means of a more connected and cohesive system. He also stated that the entire project is "years away from a product".

The company's main goal for their flying machines is to provide help to people in emergency situations and disaster areas. On top of being able to reach remote places fallen victim to natural disasters, the drones could provide emergency services quicker than some local authorities. An example would be delivering a defibrillator kit to someone having a heart attack before ambulances could arrive on the scene. Of course, commercial products could be delivered by Google's drones, too- but first the hurdle that is FAA regulations must jumped. The agency allows limited use of drones in the United States primarily for surveillance, law enforcement, and atmospheric research.

The drones themselves are 1.5 meter (5 ft) wide tail sitters, which share design characteristics from both planes and helicopters. The prototypes used in Australia flew at 40 meters and had four electrically-powered rotors to enable vertical takeoff and landing. After taking off vertically, they then rotate to a horizontal position for flying, travel on pre-programmed routes and reach their destination solo- delivering their packages to the ground on a long tether.