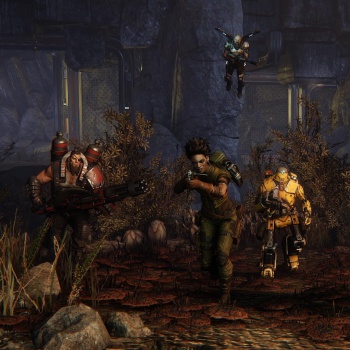 It's incredibly satisfying to take out 4 hunters as Kraken or Goliath in Turtle Rock Studio's Evolve.

I don't like people. In my gaming, I pretty much like to play solo, even in multiplayer shooters or MMOs. Coordinating with strangers over voice chat isn't much fun for me, and the friends I have in online gaming just never seem to be ready to play the same thing I am at any given time. That's why I love to play as the monster in Evolve from 2K Games. You don't have to worry about being a good teammate - you can just let those silly hunters come to you. At PAX Prime 2014, I spoke with Turtle Rock cofounders Chris Ashton and Phil Robb on how Evolve caters to many types of gamers, and what they're plans were for after the launch. But I also got to take out Janelle Bonanno, EIC of GameFront.com, and three others as the Kraken in a tense match.

"Beating four players is just satisfying," Ashton said. "Playing the Monster is an adrenaline rush. I've been playing the game for three years internally and I still walk away from a close game with the shakes."

I can relate. In my match against Bonanno, the Kraken struggled to keep ahead of the hunters. The lightning blasts and hovering ability were new toys - I had only played as the fire-breathing Goliath at E3 - and they were useful in killing animals to feed on. Once I had enough, I could evolve to the next stage and level up Kraken's abilities. The hunters had no idea where I was so I kept running and killing fauna. They found me just as I was about to evolve - the process takes about 15 seconds and you are vulnerable then - so I hoofed it out of there to find a safe place. Soon I was at the third and final level, and went to the power relay for a showdown. The power relay is the end game for the monster player. Destroy it and you win, so it makes for a wonderful cap to the match as the hunters defend and the monster attacks. I took out the medic, Lazarus, early in the fight and then concentrated on killing all the players with my developed abilities. Soon, they all went down and Kraken was victorious.

"It's less stressful being the hunters," Ashton said. "You don't have to worry about every little thing. There's less expectations being a part of a group." The monster player, on the other hand, has only himself to blame if things go south. Personally, I love the tension, but there will definitely be others who enjoy coordinating. Ashton and Robb said there people testing at Turtle Rock who always gravitate towards either mode of play, but there's also a large number of folks who ride the fence, enjoying both sides. Evolve caters to everyone.

One thing they were surprised about showing the matches at a shoutcast at E3 was how exciting Evolve was to just watch. "We didn't really have any esports aspirations," Ashton said, but when they saw crowds gather whenever it was played on the big screens and heard people cheer for the monster when he won, it was amazing to them. "The monster players were losing a lot, for whatever reason, at E3, so they developed an underdog persona," he continued. It was interesting for the team to see how entertaining and emotionally invested the audience got.

So will Turtle Rock make it easier for Evolve to be part of professional competitive gaming? We'll see. Ashton and Robb are waiting for the game to release before pulling the trigger on direct support. "Esports can happen without us," Ashton said. I, for one, would love to see an observer mode added to allow a broadcaster to show both what the hunters and monster are doing independently, but we may have to wait until after launch for that.

Speaking of launch, Turtle Rock has got one more announcement coming before February 2015. A third monster will be joining the ranks of Kraken and Goliath. Ashton said there are tons of possibilities for support after launch too including new hunters to join the 8 already available, as well as more monsters sold as DLC. "We will never sell maps," Robb clarified. The fragmentation of the community was something they really don't want to do. You'll never get booted from a match for not buying DLC - you'll always be able to play against people who have bought stuff so that their purchase might even enhance your game. Maps will always be free, they confirmed.

Evolve will be next generation only - it's out on PS4 and Xbox One for consoles but it will be out on PC too. I can also report that Evolve works well in monster play on a mouse and keyboard just as well, if not better, as it does on a gamepad. PC gamers should be happy that both control schemes are supported excellently.

I'm very much excited for Evolve, and I'm super bummed that I'll have to wait until February 2015 to play it. That said, this fall was already crowded, so maybe I'll be able to sate my hunger for monster-play much more completely in the winter months.