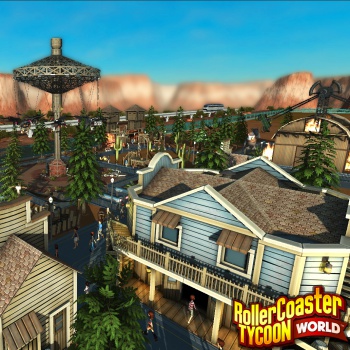 There's a lot of love for the original Roller Coaster Tycoon at Pipeworks studios.

It's a sad truth that sometimes modern sequels to classic franchises don't live up to the originals. The first Roller Coaster Tycoon was a fun simulation game that's remembered fondly for allowing you to build crazy coasters that made all of your guests or "peeps" throw up - or suffer worse fates. The next few iterations did not quite live up to the expectations and fans have been clamoring for something to come along that would allow them to make peeps throw up all over again. Enter Roller Coaster Tycoon World that's being developed by Pipeworks and published by Atari for an early 2015 release. I got a chance to sit down with producer Sean Kennedy and designer Derek Manning to talk about how World will make Roller Coaster Tycoon fans jump with joy.

First off, they've done a lot to improve the visual look and sound of the game. The new engine entirely in 3D, and the rides, coasters and scenery all look fantastic. Each of the rides have a distinct theme song playing near them and when you zoom in you'll hear that as well as the creak and mechanical noises of the ride itself. Zoom all the way out and you'll get the windy feel of the atmosphere blending with the game's overall theme music.

There's also a lot more character in the theme parks you can build. "Disneyworld is the quintessential theme park," Kennedy said. And they represent the history and character of the parks you build in Roller Coaster Tycoon World with mascots like Robin Raccoon - a Mickey Mouse analogue. You can place rides which highlight the debut of Robin in a 1930s cartoon, as well as build a statue that's reminiscent of the famous "Partners" statue in Disneyland but with a larger Robin Raccoon holding the hand of a smaller peep. The addition of these nods to popular culture will go a long way towards making your park feel real.

Why is it called "World"? I'm glad you asked! You can create your amusement park on a plot that's connected (by monorail of course) to three other plots. These can be inhabited by your friends' parks or people you meet online to create a multiplayer massive theme park. But before you cry all SimCity on me, Kennedy was quick to point out how Roller Coaster Tycoon World will be different from EA's game.

"You don't have to play with anyone if you don't want to," Kennedy said. "And there will be an offline mode." You can save up enough money to buy the other plots and build your own huge park completely on your own. But if you do choose to play online with people, the option is there.

Kennedy also made sure to point out that the team spent a lot of time playing the older games and many of them were frustrated at the tools to design a custom roller coaster. He gave me a quick demonstration of how to build one in World and it's remarkably easy and intuitive. You'll be able to design the coaster of your dreams with little frustration.

The UI also looks clean and easy-to-use, especially for early alpha code. I love the Americana theme, and it seems like Kennedy is leading the charge for a simulation that will be fun for the players that love to create, as well as manage, a lively amusement park.

Look for Roller Coaster Tycoon World to be on Steam in 2015.