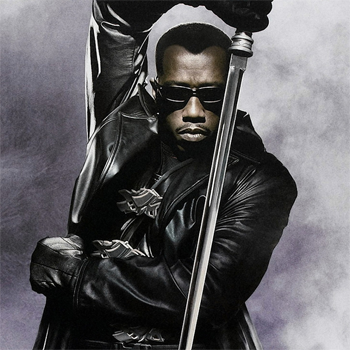 It's easy to forget, but before The Guardians, before The Avengers, before Iron Man, before The X-Men and even before Spider-Man, the first Marvel Comics hero to make a big-screen splash in modern movies was the vampire-hunter Blade. Wesley Snipes played the title character in three theatrical features, the first two of which were box-office hits, providing a surprise career-resurgence that was cut short by his arrest and imprisonment for income tax evasion in 2006.

Now, the NY Daily News' "[email protected]" is reporting that the now-free action star (who most-recently appeared in The Expendables 3) is seeking to return to the franchise - the rights to which reverted from Warner Bros back to Marvel Studios in 2011. A year ago, it was reported that Marvel does indeed have a preliminary script for a new Blade feature, though it's unclear whether said script is for a new version of the character or a continuation of the previous series.

Introduced in the pages Marvel's Tomb of Dracula #10 in 1973, Blade (real name: Eric Brooks) is an half-human/half-vampire "Daywalker" who primarily battles vampires and other supernatural creatures. Though not originally one of Marvel's better known characters in his heyday, appearances in the 90s Spider-Man cartoon and the Snipes films elevated him to one of the more prominently-known African-American superheroes.

There has been no comment from Marvel Studios, Disney or Snipes as to the veracity of the report - which also claims that Snipes stands to earn a $3 million payday for the role along with a share of the profits.