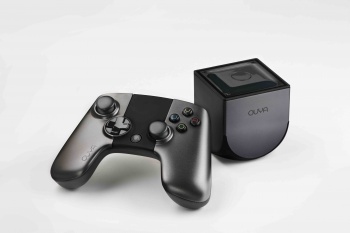 Ouya is reportedly in preliminary acquisition talks with companies like Google and Amazon, instead of simply seeking investors.

There was a brief period not so long ago when Ouya's Android console looked like the next big thing in gaming. Its Kickstarter campaign raked in over $8 million, and generated massive interest among developers and players alike. Sadly, the backer edition console was both delayed and buggy, the official release felt a little premature, and an Ouya co-founder ended up leaving the company altogether. Now Ouya is reportedly in preliminary acquisition talks with companies like Google and Amazon, seeking either a buyer or potential investors.

According to sources close to the situation, Ouya is talking to companies in China and the US about an acquisition possible acquisition. While these talks may simply provide new investors, sources consider it far more likely that Ouya will be purchased outright. So far no offers have been made, but talks are said to be proceeding nonetheless.

Sources are also suggesting that an Ouya acquisition would focus on staff instead the console itself, moving the team onto other projects. Given that Amazon and Google have their own Android devices, that's a strong possibility; Amazon was even rumored to be developing its own console. That approach would likely mark the end of Ouya as a brand, unless its buyer felt the console was worth salvaging and expanding.

A Chinese acquisition could also prove interesting simply because of the country's recently lifted console ban. At the moment however, sources are stating that talks with Chinese companies are focused on investment, not acquisition. We'll have to wait and see how these reports play out, as Ouya has yet to provide an official statement on the matter.