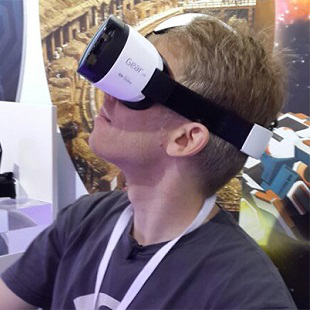 If this doesn't bring about NetForce in real life, I don't know what will.

There's plenty of mobile news coming out of this week's IFA conference in Berlin, but Samsung just stole the show with its Galaxy Gear VR announcement.

Along with announcing the new Galaxy Note 4 smartphone/phablet, Samsung finally revealed the extent of its partnership with Oculus VR, the Facebook-owned virtual reality company that recently released its second developer kit (DK2). Dubbed Galaxy Gear VR, the new headset was developed by Samsung in tandem with id Software Technical Director-turned-Oculus CTO John Carmack, and the rest of the Oculus mobile team.

The Samsung Gear VR headset is more of an empty harness than a traditional developer kit. But when you add the new Galaxy Note 4 to the equation (literally, you drop the phone into the head harness), the Gear VR becomes an extremely capable virtual reality headset.

The work done by Carmack and the Oculus mobile group was largely driver- and Android-related, including:

This collaboration is exclusive to the Galaxy Note 4 (no S5 or Note 3 owners allowed!), but it's likely telling of what direction Oculus is moving in with its own Rift consumer release. The Note 4's 1440p display, or some iteration of it, could very well end up in the retail version of the Oculus Rift, as could other Samsung-manufactured hardware. And expect Oculus to integrate any development lessons, or other hardware changes (different optics, etc.) into its own devices.

The Galaxy Gear VR will be available later this year directly from Samsung, and from select mobile carriers. Pricing is TBA on the Gear VR, while the Note 4 will sell for a standard but unconfirmed contract price (my guess is $250-$300, since it's a larger device).