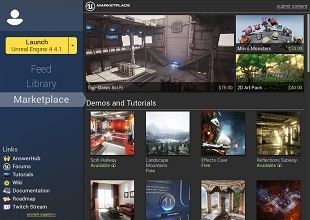 Unreal Engine gets an Epic version of Etsy.

Update: I floated a few questions out to Epic regarding some specifics on the Unreal Engine Marketplace.

On Unreal Tournament: I asked Epic about where community content for UT is going to live. It could find a home in this UE Marketplace, or mods could decide to roll out a separate marketplace. Point being: It's a decision that is still too far away in the development process.

On Revenue for Epic, community members: Epic is going with a 70/30 split, meaning 70 cents of every dollar earned by a community member in the Unreal Engine Marketplace goes to that dev, while Epic Games gets 30 cents. Not a bad pull whatsoever, and it's a split many companies use (Amazon, Apple, etc.) use in the digital goods arena.

Epic's latest engine, which has already enjoyed a full release and a new subscription model, get its latest addition today. The Unreal Engine Marketplace is finally live, allowing UE4 developers to buy and sell community-created content of all shapes and sizes.

Epic has already released a substantial amount of free content to UE4 developers, and today's Marketplace activation has even more. A number of new environments, characters, and other assets are now available. And Epic will continue to add content on a regular basis, the real mission is to get content from as many developers as possible live on the UE Marketplace.

To put it simply, the UE Marketplace system is like making hats for Team Fortress 2, but demonstrably more useful, varied.

This also paves the way for community content in Epic's forthcoming games, like Unreal Tournament. Content for the PC shooter is going to live in a similar marketplace, and could even be a baked-in component of the larger Unreal Engine Marketplace. Either way, this marketplace model will eventually be home for developers and players alike.

If you want to go deeper into the UEM rabbit hole, you can check out the official forums for the Marketplace here.