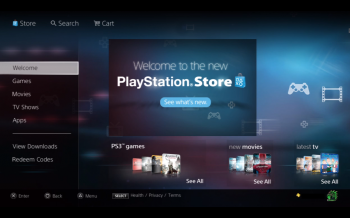 Retail games were thought to have a bigger carbon footprint than digital downloads, but new research suggests that's not usually the case.

The games industry has been making a huge push towards digital distribution lately, and while it's not always stated, environmental issues are a factor. There's a significant carbon footprint attached to creating millions of DVD and Blu-ray discs and shipping them to retailers, so common sense says digital downloads would trim that somewhat. Now a study published in the Journal of Industrial Ecology confirms this is true... as long as your download size is below 1.3 gigabytes. As soon as you cross that threshold, which almost every modern game does, you risk leaving behind a bigger carbon footprint than if you'd just picked it up from a Gamestop.

For the purposes of this study, researchers focused on the footprints of PlayStation 3 titles released in the United Kingdom. Emissions were then calculated from gameplay, production, and distribution, while retail and digital delivery methods were compared.

From the results, researchers noticed two thresholds: Game files below 1.3 GB had lower emissions when downloaded instead of purchased on disc. However, game files over 4.5 GB had lower overall emissions when distributed via Blu-Ray. At that point, the energy expended to download a game surpasses the fraction of energy spent making and distributing discs in bulk. For context, the average PS3 game is 8.8GB.

Any game sized between these thresholds carries too much uncertainty to determine how energy use is allocated, but this may not be especially significant. Only one of 2010's top ten selling games fell into that range (Need for Speed: Hot Pursuit at 4.5 GB) while the rest fell outside of it. Considering that increasing file sizes continue to be an upward trend, we probably won't see top selling games back in that range anytime soon.

In fairness, the researchers admit there are a lot of factors to consider before applying these results broadly. For example, the life cycle of used games simply cannot be tracked, so the study had to limit itself to individual users. It also doesn't account for energy sources of non-UK nations; some are turning towards sustainable energy while others, like the US, still rely heavily on coal sources. That being said, it's probably worth knowing that a tipping point for downloaded games exists, especially as the digital distribution machine moves forward.