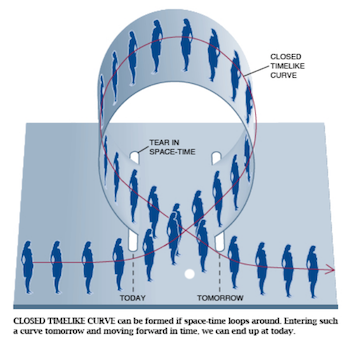 Always wanted to go back in time and kill your grandfather? The possible results might not be quite what you expected.

Recent experiments conducted regarding the possibility of time travel could provide a mathematical explanation for the theoretical phenomenon. The study operates using the most basic understanding of the universe, and the conclusion that time travel may be feasible could have profound implications for fundamental physics along with practical applications for quantum cryptography and computing.

The origin of time travel debate lies in the fact that our best physical theories appear to have no restrictions on backwards time traveling. Einstein's theory of relativity, which describes gravity as the warping of spacetime by energy and matter, supports that possibility. An extremely powerful gravitational field, like one generated by a spinning black hole, could warp the fabric of existence in a way that bends spacetime back on itself. This would create a "closed time-like curve" (CTC), a loop that could be traversed to travel back in time.

A model created by theorist David Deutsch in 1991 proposed the paradoxes created by CTCs could be avoided at the quantum scale thanks to the flaky quantum behavior of fundamental particles. Recently, physicist Tim Ralph from the University of Queensland and his PhD student Martin Ringbauer led a team that experimentally simulated Deutsch's model of CTCs for the first time, which tested and confirmed many aspects of the theory. Much of their simulation revolved around investigating how Deutsch's model rationalized the "grandfather paradox", in which someone uses a CTC to travel back through time to murder his or her own grandfather, thus negating his or her own existence.

The solution can be explained like this: Instead of a human being going back to kill the ancestor, imagine a fundamental particle goes back in time to reverse the particle-generating machine that created it. Due to the reversal, the machine emits a particle-the particle-back into the CTC. Deutsch insisted that any particle entering one end of a CTC must emerge at the other end with identical properties. Therefore, a particle emitted by the machine with a probability of one half would enter the CTC and come out the other end to reverse the machine with the same probability value, imbuing itself at creation with a probability of one half of going back to flip the switch.

For more info on Ralph's and Ringbauer's findings, check out their published work in Nature Communications. For more time travel paradoxes to wrap your head around, check out CJ Miozzi's 5 Time Travel Paradoxes That Will Induce Headaches.