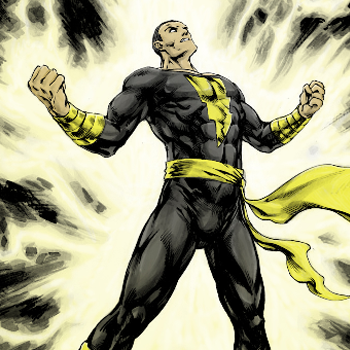 WWE Superstar confirms role as a DC Comics supervillain, but not not which film will feature him

Ending months (if not years) of speculation, Dwayne "The Rock" Johnson has tweeted the reveal that he will play DC Comics supervillain/"antihero" Black Adam in a yet unnamed upcoming feature.

Created in 1945, Black Adam is the arch enemy of Captain Marvel (aka "Shazam;") and also the hero's gone-bad predecessor from Ancient Egypt. He possesses all the superhuman (and magical) powers of Captain Marvel, making him a physical match even to powerful figures like Superman.

While a Shazam movie was among the domain names recently registered by Warner Bros, it's notable that The Rock's reveal did not include a confirmation of which film he'd be appearing in. In recent years, Black Adam has been elevated from a single-hero antagonist to a major nemesis to many heroes across the DC Universe.