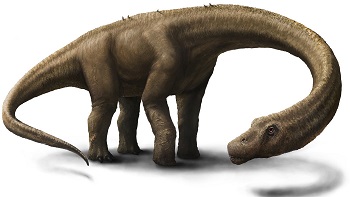 Scientists from Drexel University unearth the remains of a dinosaur that weighs more than a jet airplane.

The skeleton of an 85 ft (26 m) long, 30 ft (11 m) tall, 65 ton dinosaur was unearthed by scientists Thursday in the Patagonia region of Argentina. What may be even more astounding than its measurements is the fact that the gargantuan reptile was not finished growing when it died.

A team led by Kenneth J. Lacovara, a paleontologist at Drexel University in Philadelphia discovered the fossil of Dreadnoughtus in 2005. It took four years to excavate the skeletons, which were subsequently shipped to Philadelphia by container ship, then several more to prepare and study the more than 200 bones of Dreadnoughtus. The bones represent only 45 percent of the skeleton and include most of the vertebrae of its muscular tail. "We've got 16 tons of bone in my lab right now," Dr. Lacovara said. Even some soft tissues like tendons were preserved, and the team is trying to extract proteins and possible DNA samples from some of the bones.

Dreadnoughtus lived somewhere in the vicinity of 84 million to 66 million years ago. It was a member of a group of sauropod dinosaurs known as the titanosaurs. Most of the gargantuan members of titanosaurs are known from only a few bones. The more complete remains of Dreadnoughtus, including a six-foot-tall thigh bone, enabled a more definite estimate of the mass. For comparison, the better known Apatosaurus dinosaur (formerly known as the Brontosaurus) weighed only 75,000 pounds (38 tn), and an empty Boeing 737-900 weighs around 93,700 pounds (47 tn).

The researchers performed laser scans of all of the bones and published 3D models of each, which would allow other paleontologists to study the fossil and even print 3D replicas of the bones. Dr. Lacovara and his fellow scientists hope to use the models to study how Dreadnoughtus moved.