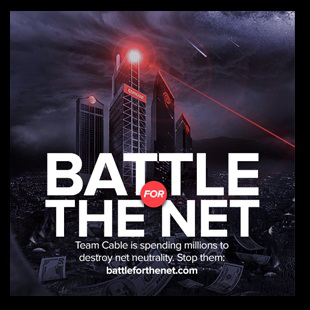 Slowing down those Internet tubes to raise awareness.

Update: Netflix has confirmed it will be joining in on the Internet Slowdown protest as well, as reported by Variety. The company won't be slowing down its streaming services, but instead will feature a spinning icon on many of its pages (member and public alike). These icons will link to the Battle For The Net homepage.

Original Story: The FCC is closing public comments on its Open Internet policy next week, on September 15th. Before the comments go dark, however, large forces on the World Wide Web are gathering for one final pro-net neutrality push.

Battle For The Net is an awareness campaign backed by several nonprofit groups, including Fight for the Future, and Demand Progress. Similar in size and scope to the online SOPA protests in 2013, the goal here is simple: Raise awareness about net neutrality, open Internet rules and regulations, and how "Cable companies want to slow down (and break!) your favorite sites, for profit."

While the Battle For The Net campaign is very much a public affair, and one that aims to stem the cable industry's own lobbying efforts and representations, several large technology companies in the United States will be showing support as well. Vimeo, Reddit, Mozilla, and Etsy are just a few of the big-name firms that will be joining in on the protest, as they encourage visitors and users to be vocal to the FCC, and Congress.

So if supporting such a movement seems to be your brand of vodka, Battle For The Net has a number of banners, images, and other accoutrement that you can use to show your support (you can find such things here).

EDIT: Because there's some confusion in the comments: No, the Internet is not actually going to slow down on September 10th, nor is any site going to slow its services down (as far as I know). The "slowdown" is more of a reference to how the Fast Lane approach to the Internet would work (paying cable companies for more bandwidth). The events on the 10th are purely to raise awareness. --Devin Connors