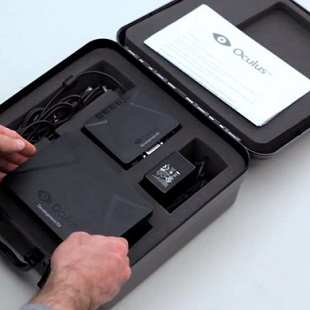 While a consumer release is still off in the undefined future, Oculus co-founders talk about the road ahead.

Between the well-received release of its second Developer Kit, and its now-flourishing partnership with Samsung? Things are comin' up Oculus! But where there's new hardware and allies, there's also a number of questions about the future of virtual reality's most visible pioneer.

Eurogamer recently sat down with two Oculus co-founders, Palmer Luckey, and Product VP Nate Mitchell, to talk about what consumers -- not developers -- can expect from Oculus down the road.

Two things we can expect from the consumer Oculus Rift? Improved resolution, and a higher panel refresh rate. The 60,000 orders-and-rising DK2 headset that started shipping to developers earlier this Summer uses a 1920x1080 display (1080p, if you will), running at 75 Hz. The panel, which is a re-purposed Samsung Galaxy Note 3 display, is a marked improvement over the 720p display found in the original Oculus Development Kit, but it's still not quite at the level a consumer would enjoy.

While Luckey says the consumer version will have a 90 Hz display panel, specifics on the resolution are not yet public knowledge. "It is a significant increase," Luckey said to Eurogamer, but no specific number was mentioned.

Samsung, which is now a very visible partner of Oculus, is now shipping smartphones with 2560x1440 resolution displays. If Oculus continues to source such hardware from Samsung, you can bet that a consumer release will have, at the very least, whatever flagship panel Sammy is slinging it its Galaxy phones, tablets, and phablets.

In a final bit of unsurprising news, the co-founders say Oculus wants to stay in the $200-$400 range. Given that both the DK1 and DK2 sell/sold for roughly $350, that's always the number I've used as a baseline. My best guess? They split the difference, and go with a $299.99 MSRP.

There's plenty more in the Eurogamer interview, so head on over and dig into the virtual insanity!