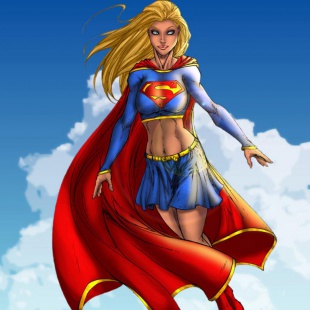 This version will apparently differ somewhat from the comics.

DC has even more plans for its comic book television overload, at least according to a report running this afternoon on Deadline Hollywood.

According to Deadline's Nellie Andreeva, Arrow and The Flash executive producer Greg Berlanti is now working to get a TV series based on Supergirl off the ground. Berlanti is reportedly teaming up with No Ordinary Family producer Ali Adler to bring what Deadline says will be "a new interpretation of the the Supergirl character and her story" to tv screens, though no word right now on when such a show will air, or on what network.

Supergirl, first introduced in 1959, has gone through several different incarnations over the years. Originally she was Kara Zor-El, Superman's Kryptonian cousin who also somehow survived the destruction of Krypton. Sent to Earth by her father to be raised by Superman, she develops similar powers (and weaknesses, like Kryptonite). This version of the character died sacrificing herself to save Superman during DC's 1985 crossover event, "Crisis on Infinite Earths". When Superman was rebooted the next year, DC editorial decreed that he should be the only survivor of Kyrpton's destruction and Kara subsequently was not introduced in the new continuity.

A different version of Supergirl was introduced in 1988, this time a clone created by Lex Luthor. This version eventually merged with a human named Linda Danvers, which happens to be the same name used by Kara as her Earthly secret identity, though the two characters were otherwise unrelated. With the New 52, Kara Zor-El has been reintroduced, this time as a more serious, fish-out-of-water character who has some difficulty accepting the destruction of Krypton as fact. She is currently a member of Guy Gardner's Red Lantern Corps.

Say it with Moviebob everybody: Comics are weird.

So what do you think? Personally, the idea of a new interpretation is both interesting and somewhat frustrating. DC has already decided that its TV series are unconnected to the DC Cinematic Universe. As Supergirl has always existed as a female counterpart to Superman, it's a bit weird to think of her having an origin story completely unrelated to the character. On the other hand, since the DCCU isn't related to DC's TV shows, and since The Flash is extremely Silver Age in its tone, we at least can breathe easy knowing this won't be a dark, gritty reinterpretation of the character on par with Batfleck and Superman crying in the rain.