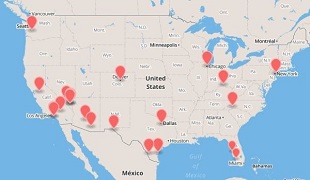 19 towers have been identified so far, and that number is expected to rise.

Much of the chatter around hacked phones, cloud storage, and the like gravitates toward celebrity photos -- and with good reason, as it's an appalling invasion of privacy -- but this week's other other phone hack news is much, much more scary.

Popular Science has a report founded on information from ESD America, a tech firm that specializes in high-security smartphones. The firm, founded by Les Goldsmith, says it's found a number of "interceptor" cell towers right here in the United States. This is hardware designed to snatch calls and data out of the air before it goes to its intended destination (a cell tower operated by Verizon, AT&T, etc.)

What's even more troubling than the hardware, which can filter data on 2G, 3G, and even 4G networks? No one is entirely sure who's operating and monitoring the devices.

ESD America uncovered the towers when testing the CryptoPhone 500 platform, which uses off-the-shelf hardware (like a Samsung Galaxy phone) with a heavily secured version of Android. ESD also says some of its customers uncovered towers on their own, then showing the data to the tech firm.

Some of these towers have been located in close proximity to US military bases. This could be potentially good, like the military monitoring ground close to its operations in case some sort of attack is imminent. Or it could be bad, be it some military hot head abusing his/her power, or a foreign element (like a hacker, terrorist, etc.) trying to gain access to sensitive information.

I have a hard time believing that the military would allow such hardware near an installation unless it was in direct control of such hardware. Regardless, such hardware out in the wild -- and you know these 19 points are just the tip of the sword -- is indeed troubling. This same lack of chatter applies to telecoms as well -- wouldn't they have something to say if they found rogue cell towers in the U.S.? Surely they have the means to monitor such traffic.