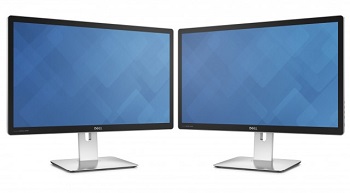 Who wants a 4K display when you can have a 5K monitor with twice as many pixels?

Dell's new UltraSharp 5K monitor is certainly a sight to behold. With a screen size of 27 inches and a resolution of 5120x2880, it has two times the amount of pixels as a 4K display, and seven times as many pixels as a vanilla 1080p monitor. At the time of its release, it will finally overtake IBM's 2003 T220/T221 as the highest-res desktop monitor.

The Dell UltraSharp 27 Ultra HD 5K monitor (quite a few "ultra"s in there) has a total pixel count of 14.7 million. By comparison, a 4K monitor or television has 8.3 million pixels. A 1080p monitor or smartphone has only 2 million pixels. Its size and resolution combined translates to 218 pixels per inch- comparable to laptops like the Asus Zenbook or the Apple Retina Macbook Pro with high resolution display. 218 PPI is also more than double the current 22- or 24-inch display, which sits somewhere in the vicinity of 100 PPI

The UltraSharp also boosts several useful features besides its resolution. For its use in the workplace, the monitor is armed with Dell PremierColor calibration and an anti-smudge/anti-reflective coating. It has six USB ports, a media card reader, and two integrated 16W Harmon Kardon speakers.

When speculating as to how Dell designed the monitor to achieve 5K, one theory stands above everything else. Since no manufacturer is making 5120x2880 panels at 27 inches for consumer products, the likely explanation is that the UltraSharp is sporting two 2560x2880 panels overlaid as a "tiled display". Some 4K use this method with two 1920x2160 panels as an alternative to a single 3840x2160 panel. The 5K monitor is most likely driven by two DisplayPort 1.2 connectors with Multi-Stream Transport.

The Dell UltraSharp 27 Ultra HD 5K monitor will be available sometime before Christmas and have the snuggly price tag of $2500.

Be sure to stay wired to The Escapist for all your up-to-date Science and Tech news.