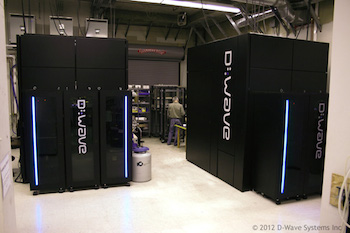 If successful, Google's goal of creating a quantum computer could change the field of computing drastically.

On top of Project Wing and attempting to create an encrypted email service with Yahoo!, Google has placed another endeavor directly on their plate. The search engine giant has begun efforts to design and build hardware for a quantum computer.

Previously, Google began work back in 2009 with "quantum computing company" D-Wave Systems, whose claims of having made the first quantum computer have been proven illegitimate. Now, John Martinis, professor of physics at the University of California, Santa Barbara, has joined the company to set up a new quantum hardware lab near the university. This lab will function as a place to attempt to create his own versions of the chips found in D-Wave's computers.

Quantum computers operate using quantum physics to solve problems- hence their appropriate name. Their rate of problem solving is at a level that a normal computer would accomplish the same amount of work if given millions of years to do so. Martinis has spent over ten years working on a more substantial approach to quantum computing and, based on his findings, built some of the largest, most accurate systems of qubits (the basic building blocks that encode information in a quantum computer).

Qubits working together can use advantages of quantum mechanics to quickly discard incorrect paths to a solution and identify the correct one. However, qubits are tricky to operate due to the delicacy of quantum states. "We would like to rethink [D-Wave's] design and make the qubits in a different way," said Martinis. "We think there's an opportunity in the way we build our qubits to improve the machine."

Google still plans on collaborating with D-Wave. The leader of Google's quantum research stated that the two companies will continue to work together, and that Google's D-Wave computer will be upgraded with a new 1,000 qubit processor when it becomes available.