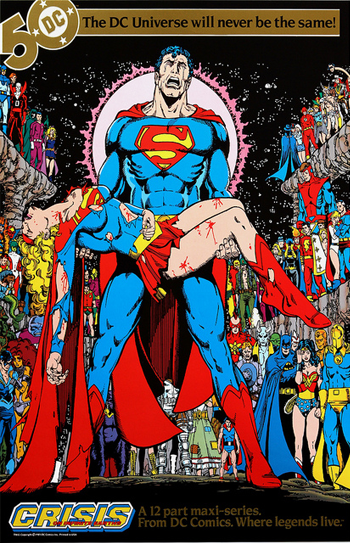 Is the comics publishing giant already looking to another universal-reboot?

As you may or may not be aware, when DC Comics wants to make big line-wide changes to its books, it often does so in the form of massive crossover-events where huge cosmic doings cause changes to the reality of the DC Universe.

Now, it appears it may be happening again: In an interview with IGN, DC boss Dan DiDio hinted that the next big DC event (after Future's End) would involve the culmination of an "Epic Trilogy." Earlier in the week, DiDio shared an image of one of his "Crisis Counseling" columns from Infinite Crisis on Facebook, wondering aloud if it was time to "do it one better."

There have technically only been two "official" DCU-reshaping Crises: Crisis on Infinite Earths, which merged DC's Multiverse into a single timeline in 1985, and 2005's Infinite Crisis, which broke them up again. But other events like Final Crisis (despite the title, not technically considered a sequel to the earlier Crises) and Zero Hour have had similar effects. The current "New 52" DC Universe, which mainly features reset-to-zero versions of classic heroes, was created by an event called Flashpoint. A more recent event series, Forever Evil, notably ended with the reveal that original Crisis big-bad The Anti-Monitor was the secret true power behind recent grim events.

There has been official confirmation from DC as to what, if anything, is actually being hinted at; and no sense of what (if anything) about current or former continuity a third Crisis would be intended to do (or undo.)