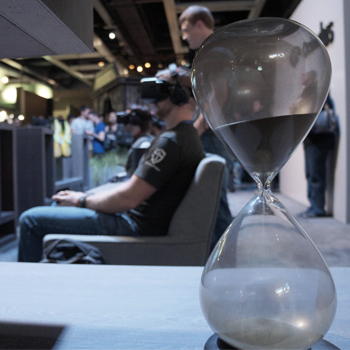 The inventor of the Oculus Rift and founder of Oculus VR believes his product will go mainstream, but it may take a number of years before this is possible.

Last month Oculus Rift creator Palmer Luckey revealed just how optimistic he was about his product when he stated he saw an Oculus Rift in every home. In an interview with GamesIndustry International Luckey has gone on to clarify this sentiment that he understands it can take a couple of years before the virtual reality headset goes mainstream.

"Maybe VR doesn't really take off for consumers for some time," Luckey explains, guessing that "it might be next year, it might be five years from now." However, "The good news at having such a big backer behind us [Facebook] is that we can now afford to play that long game. Rather than having to make money now or we stop existing and someone else takes over, we can think about the best thing to do for the long-term of virtual reality."

Luckey also acknowledges a key component that will help the Oculus Rift survive in the market once a retail version launches for the public is content, and they're working hard to make sure that business is operational by working with video game developers as well as exploring other mediums like movies and television. Oculus has just launched a program called Share, where developers can try out project ideas they have and receive feedback.

"With publishing, it's not just about what shows off the tech; it's about what is actually going to make people go out and buy a Rift. And that's been one of the gating factors to the consumer version, in the sense that a lot of people would buy the DK2 right now. But if you did that you would have no games to play. We need to help seed the ecosystem and remove that risk for developers. Super important."