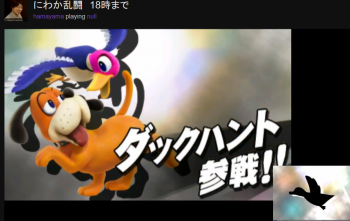 Before you go any further, be warned that this post contains very heavy spoilers!

Update 2: Yushako has unlocked Jigglypuff and R.O.B, fully completing the roster (at least for now).

Update: Yushako has just unlocked Bowser Jr., and it looks like his alternate costumes are actually all seven of the Koopalings.

Original Story: A twitch.tv streamer by the name of Yushako was lucky enough to nab a copy of Super Smash Bros. for 3DS a couple days early, and has decided to stream is experience for the rest of us, showing off the game's gameplay, and spoiling just about every "secret" character.

First up, that complete list of leaked characters we saw pop up early looks like it will turn out to be completely true, as all of the characters it leaked have been among the characters revealed by Yushako. So far, they include:

He also revealed a couple of new stages, such as a retro F-Zero stage, and an EarthBound-themed stage.

Be sure to check out his stream, which he should be running until he either falls asleep... or Nintendo shuts it down.