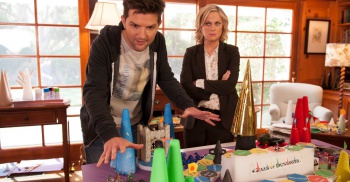 The insanely convoluted Cones of Dunshire game from NBC's Parks and Recreation will land on store shelves, courtesy of Mayfair Games.

It's not so unusual to see fictional board games from TV shows become real; the fan-made Cyvasse board from Game of Thrones is a great example. Now the same thing is happening to Parks and Recreation's Cones of Dunshire, an explicit parody of modern tabletop games. After a giant version of Dunshire was played on the GenCon floor (that's meant literally, it wouldn't fit on a table), Mayfair Games is looking to bring the game to stores with regular and deluxe editions.

On Parks and Recreation, Cones of Dunshire is the creation of Adam Scott's character, Ben Wyatt. The fictional game is obsessively detailed, burying the simple goal of gathering four cones under confusing sub-objectives, varied character classes, and other quirky gameplay mechanics. In real-life however, the game was actually developed with Mayfair; NBC approached the tabletop publisher about creating this insanely complicated game for an episode, and now it's taken on a life of its own.

According to Mayfair vice president of sales and marketing Bob Carty, the company is considering crowdfunding a "super-deluxe" version of the game before releasing a regular edition. "We're doing everything backwards," he said, which I have to admit, is very much in spirit with the game. When it's ready, the deluxe version of Cones of Dunshire should cost $100 while the regular version will be $60 or $70. The crowdfunding campaign is also expected to have a charitable component.

There's no word on a release date just yet, but given how quickly Cones of Dunshire is moving along, we'll likely see that Kickstarter campaign fairly soon. Parks and Recreation, meanwhile, begins its final season this fall, and Cones is expected to be a part of it.