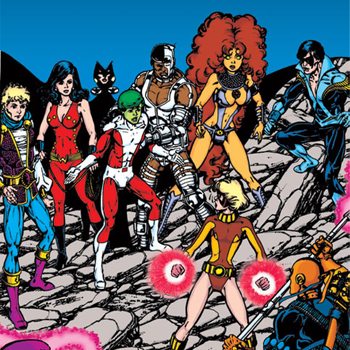 Nightwing, Starfire and friends may become the next big DC Comics TV series

Marvel may have Agents of S.H.I.E.L.D. returning for a second season and four Netflix series coming down the pike, but in terms of sheer volume DC is the undisputed king of comic-book heroes on TV: Arrow is heading for a third season, The Flash and Gotham will debut this Fall and projects based on Hourman and Supergirl are in development. Now, Deadline reports that The Teen Titans could be next - though perhaps without the "Teen" part.

According to Deadline's Nellie Andreeva, Titans is "nearing a pilot order" at TNT. The story calls the prospective cable drama an "action series" that will focus on Dick Grayson transitioning from his role as Batman sidekick Robin to a new grownup identity as Nightwing, leading a team that would include sorceress Raven, alien-princess Starfire and "many others." Akiva Goldsman, who wrote Batman & Robin nearly two decades ago, will write and executive-produce the pilot.

Originally created in 1964 as a "Junior Justice League" made up of grownup heroes' teen-sidekicks, The Teen Titans are today best known from the celebrated 1980s revival of the franchise by Marv Wolfman and George Perez that served as DC's answer to The X-Men (re: superhero adventures as melodramatic teenage soap-opera) and was among the most popular series of its era and was adapted into a popular animated series in 2003. Of note: One of The Titans' principal enemies in both the comic and series, Slade Wilson aka Deathstroke, current appears as a character on Arrow - though there is no indication that Titans would share continuity with that series like The Flash will.