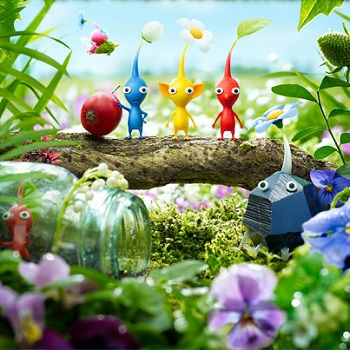 Captain Olimar and his Pikmin plant themselves in the movies with three short films produced by Shigeru Miyamoto.

The Pikmin are returning in Super Smash Bros this fall, but the plant-animal hybrids and Captain Olimar will grow into starring roles once more in Pikmin Short Movies late in October.

According to Variety, Shigeru Miyamoto produced three shorts featuring Olimar and the Pikmin that will debut at the Tokyo International Film Festival. At the festival, Miyamoto take part in a presentation with Nobuo Kawakami, Producer Trainee on Studio Ghibli film The Wind Rises. The festival takes place October 25-31.

Nintendo wanted to create Pikmin cartoons before Pikmin 3 came out last year. Miyamoto, the creator of Super Mario Bros. and The Legend of Zelda, was personally involved in the creation of the cartoons that never saw the light of day. Miyamoto has become less involved in the development of the franchises he created, and making short films about these characters is a great way for him to be creatively active with Nintendo.

The report from Variety describes the three films as a compilation: "'The Night Juicer,' in which Captain Olimar makes his favorite juice; 'Treasures in a Bottle,' in which Pikmin meet a strange treasure; and 'Occupational Hazards,' an adventure at a construction site."

"The Night Juicer" sounds similar to the concept of one of the shorts Miyamoto shared over a year ago. In a preview shown to Polygon, Olimar is caught blending what looks like Pikmin into a drink. While the original plan for Pikmin cartoons, possibly distributed to Nintendo 3DS systems, never took off, it looks like those concepts are making their way to the short films debuting next month.