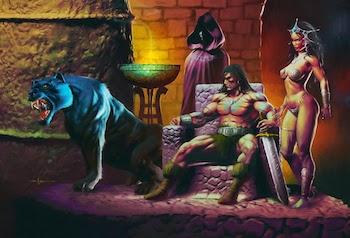 In the original Advanced Dungeons and Dragons Dungeon Master's Guide, Gary Gygax talks about how fantasy and science fiction have deeply influenced his game. In the back, under Appendix N, he writes a list of "inspirational readings". Not only does he mention famed horror author H.P. Lovecraft, but Gygax specifically lists him as a crucial influence. I mean, just look at those gelatinous cubes! If you long for old-school roleplaying and want a strong dose of cosmic horror, then Revelry in Torth is made for you.

The module, written by the awesomely named Venger Satanis, is described as being "sandbox, urban adventure, dark, Conan-esque sword & sorcery, just a hint of sci-fi, and very little gonzo." In the city of Torth, players will have to navigate a tangled web of conspiracy and scheming as they investigate a murder. Expect to discover earth-shattering secrets that make you question reality along the way. There's also a backstory involving a huge magical holocaust and possible machine slave revolt that sounds like the right mixture of interesting and insane.

The author hopes for Revelry to be the first in a trilogy, but all that will be decided whether or not he hits the $2,500 funding goal by October 14th. If this sounds like something your tabletop group would enjoy, pitching $7 in the kickstarter gets you both the PDF and a signed print copy of the module, which sounds more than fair.