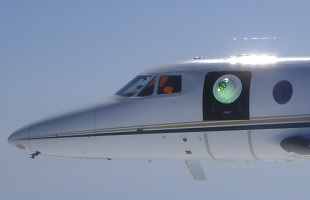 The Aero-adaptive Aero-optic Beam Control, or ABC, has a 360-degree view of incoming threats.

How many sci-fi properties have lasers or blasters bolted onto aircraft or spacecraft? Too many to count, but that kind of offensive/defensive weaponry is getting a serious look from DARPA, and U.S.-based defense contractors alike.

Lockheed Martin, the same contractor behind the struggling F-35 and F-22 fighter programs, has teamed up with DARPA, the U.S. Air Force Research Laboratory (AFRL), and the University of Notre Dame on "ABC," or the Aero-adaptive Aero-optic Beam Control system.

Simply put? ABC is a laser turret mounted to an airplane. The test plane, seen to the right, has the ABC sphere mounted in a way that gives the turret a 360-degree view of the world, allowing the weapon to "engage enemy aircraft and missiles above, below and behind the aircraft." Lockheed Martin says components of the ABC system factor in weather conditions and turbulence (see "flow control" and "optical compensation") when in use, allowing the turret to operate in less-than-ideal flying conditions.

The test craft is a French-built Dassault Falcon 10, an older business jet-minded platform that was produced in the 1970's and 80's.

The system has seen eight flight tests so far, with more scheduled in 2014 and 2015. All the included hardware has been approved by both the U.S. Air Force, and the FAA.

If the tests go well? The next step would be to outfit some sort of fourth- or fifth-generation fighter jet with an ABC turret. An F-16 or F-35 with a laser beam attached to it's nose or belly? That's mighty dangerous (so long as you can get the F-35 to fly).