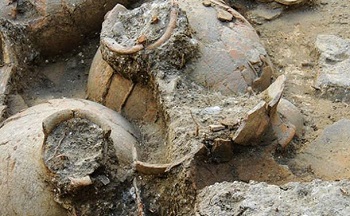 Archaeologists previously thought the structure was part of a city wall, but recent work indicates there is no city beside it and that the structure is a stand alone monument.

An Israeli researcher by the name of Ido Wachtel discovered a crescent-shaped monument estimated to be 5,000-years old. If the dating is correct, this structure would be older than the Egyptian pyramids and certain parts of Stonehenge.

According to information published by LiveScience, the crescent-shaped monument has a width of around 500,000 cubic feet (14,000 cubic meters) and its length is 492 feet (150 meters)- making it longer than an American football field. Located closest to the Israeli city of Safed (Tsfat), its design is believed to represent the shape of the Moon. Additionally, it was most likely an important landmark that helped to mark town borders and declare rights over natural resources by a local state or pastoral population.

In an email, the archaeologist said that the time it took to construct the structure is believed to be between 35,000 to 50,000 days. If the lower estimate is proven correct, a team of 200 ancient workers would have needed more than five months to build the monument. He also mentioned that an endeavor of this magnitude would have proven complicated for people who depended on their self-grown crops for their livelihood, since the majority of ancient people were required to dedicate most of the year working to grow food.

Wachtel also discovered an ancient town called Bet Yerah (Hebrew for "House of the Moon God") is only a day's walk from the lunar-crescent-shaped monument. Bet Yerah was a large town with a grid plan and defense system, and numerous artifacts in the area prove its native citizens dealt with the early kings of Egypt.