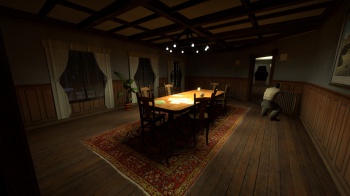 Gone Home has been out for over a year, and it's still getting lots of attention from the gaming community. It's a widely-recognized breakout hit from the relatively calm exploration genre, but apparently some players see Gone Home and think "You know what this needs? More hostage situations." That explains why one intrepid level designer ported Gone Home's house map to Counter-Strike: Global Offensive, adding far more terrorists and counter-terrorists than the original allowed for.

Counter-Strike: Global Offensive is the latest edition of Valve's multiplayer shooter franchise, which allows fans to add custom maps directly through the Steam Workshop. That's where the "cs_gonehome" can be found, a recreation of Gone Home's house designed by workshop contributor NIPPER. In this map, the counter-terrorists must find and escort a randomly-spawned hostage to a rescue zone the garage, while the terrorist team tries to prevent them from doing so.

"Your family is mysteriously missing again," the description reads. "But you can figure that out later. Right now you have more pressing issues to attend to, like the fact that your house is full of terrorists and some dude has been taken hostage. Rescue him by taking him to the garage where you can make a swift getaway on that old bike [that's] been sitting there for twenty years."

All things considered, that's a pretty amusing mash-up. Now how about that BioShock/Gone Home crossover? It's supposed to be canon, after all. In the meantime, Gone Home is expected to head to the Wii U next.