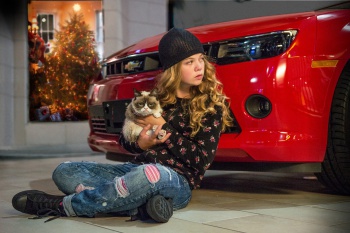 Lifetime has found its voice for the famous Grumpy Cat in an upcoming Lifetime TV movie called Grumpy Cat's Worst Christmas Ever. Aubrey Plaza, known for frequently playing apathetic and deadpan characters, will voice the cat that became an internet meme.

The casting for Plaza, who has played unenthusiastic intern April Ludgate on Parks and Recreation and Eska in Legend of Korra, comes after Jane Lynch (Glee) turned down the offer last month.

Grumpy Cat, whose real name is Tardar Sauce, hit the internet in 2012 and became viral, even making appearances on TV. Grumpy Cat's Worst Christmas Ever is a TV movie about a cat who lived in a mall's pet shop where no one would adopt her until a 12-year-old girl named Chrystal finds her. Chrystal discovers she can hear Grumpy Cat talk, but she's the only one who can hear it. Grumpy Cat ends up reluctantly stopping a kidnapping of a dog - naturally whom she hates - during the holidays and rescues Chrystal after the mall's closing time.

Tardar Sauce plays the role of Grumpy Cat in the movie.