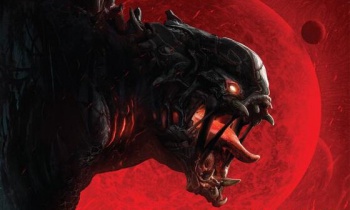 Evolve is the closest anyone who isn't Arnold Schwarzenegger or Carl Weathers will get to being in a Predator movie.

Unlike our fearless leader, who is some kind of monster, I look at situations with an analytic eye, and find ways to overcome them as a team. As I stood in line at Turtle Rock's Evolve booth at this year's Tokyo Game Show, I watched countless groups of hunters fall to the game's merciless monster. Rather than try desperately to get myself behind the controls of the beast, I thought to myself: I can beat this thing. If it bleeds, we can kill it.

My first attempt was unsuccessful. I was given the role of the medic, and while it was certainly a very interesting class: one that focused on supporting her team by highlighting weak-points on the monster, slowing it with tranquilizers, and of course, healing her team-mates with her Team Fortress 2 Medic-style medi-gun, I ultimately failed to adequately rally my teammates to beat the beast. For most of us, after all, it was our first time playing, and while we were wasting time figuring out what all our guns did, the monster was busy hiding. Waiting. Evolving.

Round two. I conscripted a friend of mine to come back to the booth with me, and made it clear to the two other strangers playing with us: stick with me and we can win. At this point, I had watched a few more matches, and I had noticed that while every single class was important, while the team would crumble and fall if a single player failed to pull their weight, the trapper was clearly the leader. He was the one who found the monster, who trapped it, who called the shots. This time, I made sure I was the trapper.

Appropriately, Griffin, the trapper I played as, was a Crocodile Dundee-esque stereotype, with, especially considering the style of the game, a striking resemblance to one Jesse Ventura. When I played Evolve, it really felt like I was playing Predator: the game, though instead of having to resort to crude log traps and terrified teammates like Arnold, I had a highly skilled, heavily armed, squad of professionals at my side.

First things first, we had to find the damn thing. The trapper does this by systematically filling the map up with sound detectors, that will "trip" whenever the monster walks by. With my squad close by my side, we efficiently moved through the jungle placing detectors in a grid formation. Eventually, a detector was tripped. "Quickly. Follow me," I shouted into the mic. We took to the air with our jetpacks, hoping to catch him before he left the area.

Sure enough, when we arrived, he was there, and he was still in his "first stage" of evolution. He saw us and panicked. We weren't meant to find him, not this quickly. He tried to run, but I quickly threw up a "mobile arena" around him, sealing all exits. He was trapped. We opened fire. He took damage. If it bleeds, we can kill it.

As the trapper, my role was primarily to find the beast and trap him in the mobile arena, but I did have a combat role. I would spear the monster with my harpoon gun, forcing it to stand still. This was absolutely vital in allowing my team to pummel it with bullets, rockets, and fire.

Eventually, he broke free of my harpoon, and the mobile arena wore off. He fled. I looked at his HP bar. There was less than a quarter left. My team started to chase him. "No," I told them. "Regroup. Heal up. Wait." I had seen too many groups hastily chase the monster, only to get distracted by dangerous wildlife, and picked off when they got weak. I wouldn't make the same mistake. As our group's medic healed us up, I noticed a ping on my map. The monster had tripped another sound detector. I smiled. Time to end this.

Evolve was easily the best game I played at Tokyo Game Show, and you can just expect it to get better. It was so fluid, polished, and gorgeous, that I was actually shocked to hear the Turtle Rock dev I spoke to tell me that this demo build is actually quite out-dated now, and the latest build has much more features such as additional hunters and monsters.

He even said that the team was working on a co-op version of the game, and possibly even single player, for those of you who don't play well with others (though I would highly recommend you did).

This game is really shaping up to be something great, something new, and something really, really fun. You really should be keeping a close eye on it when it comes out next February for PS4, Xbox One, and PC.