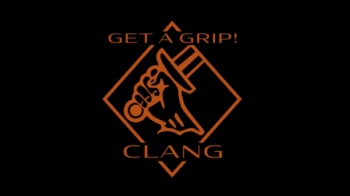 Precisely one year ago, author Neal Stephenson's Kickstarted swordfighting game CLANG hit the pause button and marinated in its own juices, hoping for improvement. That didn't happen; in fact, as Stephenson admits, "the prototype was technically innovative, but it wasn't very fun to play." So CLANG is no more, two years after raising more than half a million dollars to make it.

CLANG aimed to capture the life-and-death of an actual sword fight, but the problem, Stephenson admits, was that obsession with historical accuracy didn't make for a fun sword sim. It didn't help that motion control really wasn't up to the task of bringing CLANG to life. The CLANG team delivered a functional, but flawed prototype, then ran out of money and couldn't persuade a publisher to fund it further.

The Kickstarter rewards have all gone out, and refunds have been processed, says Stephenson. There have been some complaints that the $150 print fighting manual backer reward didn't go out, but Stephenson categorically denies this.

"I just went and looked at stamps.com to see if they still had historical data from when we shipped all the rewards, and they do," says Stephenson. A post office error, he says, is the most likely explanation, if you still happen to be waiting for that fighting manual. "We still have some of the physical items which we'll be happy to send out to backers once we have had an opportunity to follow up with them. Multiple comments aside, statements that the hard-copy fighting guide wasn't distributed is incorrect."

CLANG backers can sign up to a list called REVERB, essentially a newsletter with future announcements about upcoming projects. One day CLANG backers may even see a bonus reward from some of these projects, but Stephenson doesn't want to promise anything since it's very early days and those projects aren't his to control.

"Thanks for backing the CLANG project," Stephenson concludes. "I am sorry that we were unable to advance it beyond the phase that you funded."