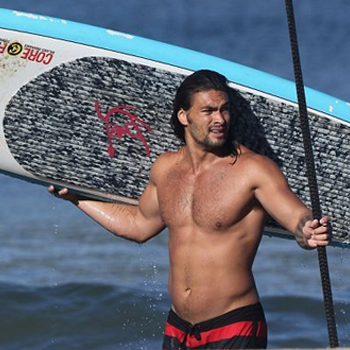 Note: The following rumors could be considered minor spoilers for Batman v Superman: Dawn of Justice.

The "open secret" of Jason Momoa playing DC Comics' Aquaman has raised eyebrows among fans from the beginning, given how little the Game of Thrones actor resembles traditional depictions of the characters. Now, Schmoes Know's Meet The Movie Press Podcast is claiming to know what the plan is for the classic hero's new live-action look.

According to Schmoes Know (which presents the podcast in question) Momoa's Aquaman will "Look like a surfer essentially with tribal tattoos and all that jazz." It's worth noting that Momoa sports actual tattoos in real life, including a prominent tribal design on his forearm.

In the same podcast (which also helped break the now widely-rumored DC Movieverse "No Jokes" policy) it is further claimed that the film will reveal Momoa's Aquaman (in the comics a half-human/half-Atlantean prince who rules Earth's oceans and can communicate with sea creatures) having been lurking on the periphery of Man of Steel: According to the rumor, it will be revealed that a pod of whales seen by Clark Kent after he falls into the ocean unconscious near the beginning of the film were actually sent by Aquaman to rescue him.