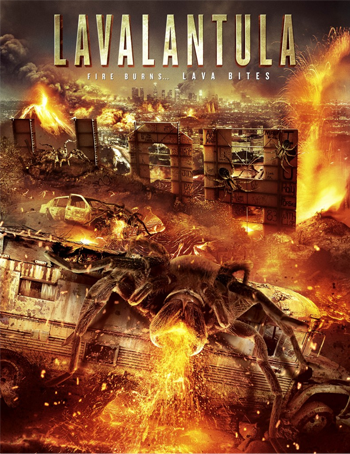 The Syfy network scored a pop-culture phenomenon with their surprise-hit Sharknado movies, and now they're looking to repeat that success with a new monster-mashup franchise: Lavalantula, in which Los Angeles is attacked by gigantic lava-breathing prehistoric tarantulas that "erupt out of the mountains of Santa Monica."

The film is set to be directed by indie-horror fixture Mike Mendez, who has familiarity with the genre having directed the Saturn Award-winning horror-comedy Big Ass Spider last year. While it is unknown whether Lavalantula will take a similarly tongue-in-cheek tone, the film is set to star several cast members of the Police Academy series, including Steve Guttenberg, Leslie Easterbrook and Michael Winslow. Nia Peeples and KROQ Los Angeles DJ Ralph Garman will also star.

Since its controversial name-change (from The Scifi Channel) in 2009, Syfy has found success and renewed pop-culture relevance ia the cult-popularity of their bizarre, often intentionally-cheesy Syfy Original Movies productions; which have included titles such as Hammerhead: Shark Frenzy, Jersey Shore Shark Attack, Piranhaconda and Mega-Python Vs. Gatoroid. The phenomenon went mainstream last year when the initially low-rated Sharknado became a surprise viral hit on social media, resulting in bewildered mainstream-media coverage the following morning.