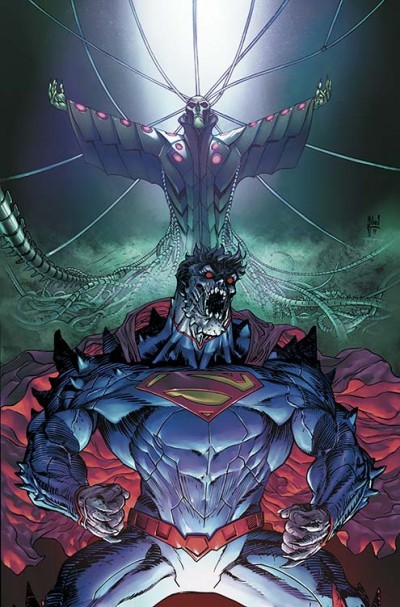 SPOILER ALERT! This week's issues of Superman: Doomed and Futures End: Booster Gold shake up the reality of the DC Universe.

Back in 2011, when DC Comics decided to wipe the slate clean and start over with its "New 52" reboot, fans were torn. Some saw it as an opportunity to get a fresh new take on established characters, while others were upset over the idea that DC had thrown out the proverbial baby with the bathwater by excising the foundation on which their favorite characters were built. Things got a little more convoluted after the reboot, as certain books and characters cherry picked bits and pieces of their "pre-52" histories to keep while still trying to make the new changes fit. Now, three years later, it looks like the "New 52" could be coming apart at the seams ... at least if this week's new releases are any indication.

Comic fans who have been keeping up with DC's big Superman: Doomed crossover got a big shock this week in Superman: Doomed #2's final page (seen below), which showed the story's Big Bad, the New 52 version of classic Superman villan Brainiac, being "acquired" from the black hole he was trapped in by a mysterious force, whereupon he catches a glimpse of shattered shards of reality. For longtime comic fans, these shards show familiar faces and places, including the original Justice Society of America, the classic New Teen Titans lineup from the '80s, the Legion of Superheroes, and even the Flashpoint reality that originally caused the birth of the "New 52" universe. What all these things have in common is that they all pre-date the "New 52", and they were all supposedly wiped out during the reboot. 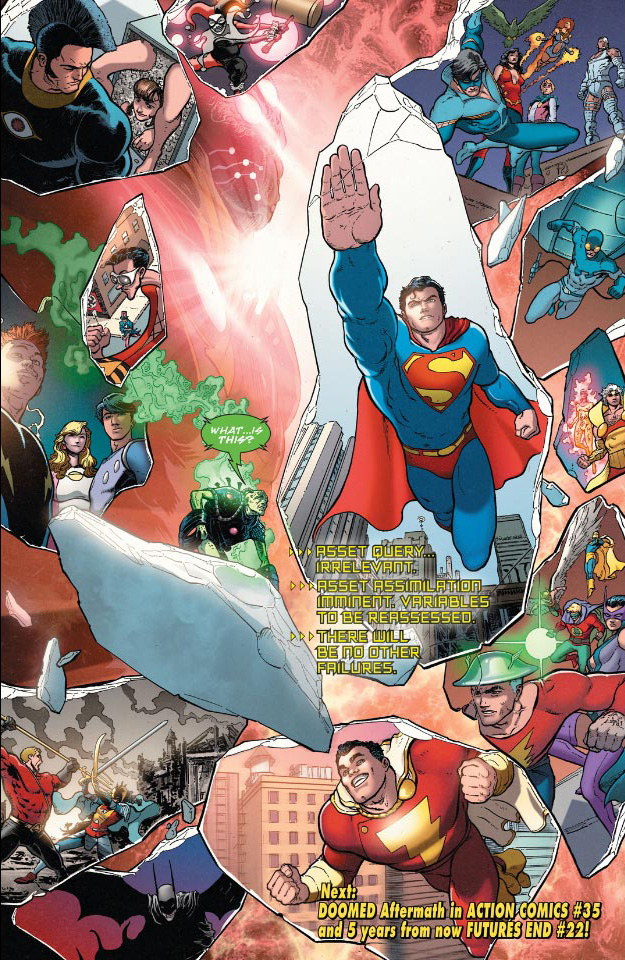 As if that wasn't enough foreshadowing, this week's Futures End: Booster Gold #1 features a multiverse spanning adventure by Booster Gold character that is NOT the Booster Gold of the New 52 universe. In fact, it's strongly indicated that this Booster is the same one readers last saw in the pre-Flashpoint DCU. After bouncing through various alternate universes from the DC Universe, this version of Booster (along with his New 52 counterpart) are captured and interrogated by robots that have very Brainiac-like designs, in order to discover the location of Vanishing Point. Vanishing Point, for those that need a refresher, exists at the last possible moment of the universe and was once the base of operations for the Linear Men, a group of heroes dedicated to the preservation of the DCU timestream.

So, what does this all mean for DC fans? For starters, it seems to acknowledge that the "clean slate" offered by the New 52 reboot wasn't necessarily as clean as once thought. And it hints that we haven't seen the last of the previous universe(s). It also seems to be laying the foundation for the next major DC event, Blood Moon, currently scheduled to start in April of next year. Coincidentally, Blood Moon will also take place during the 30th Anniversary of DC's original Crisis on Infinite Earths. Whether or not Blood Moon will end with yet another universal reboot, a return to the status quo, or something else in between remains to be seen.

One thing that is certain, though, is that whatever trick DC has up its sleeve, the ramifications of this week's DC comic lineup will be felt for some time.