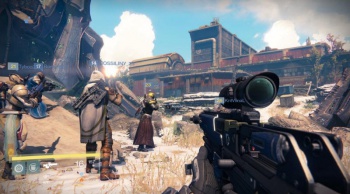 Bungie has fixed Destiny's Skywatch "loot cave" exploit, meaning players must go back to grinding to find the best gear.

Destiny hasn't been out for long, but players have quickly found ways to exploit gameplay in their favor. Perhaps the best example of this was the Skywatch's "loot cave", a small opening that constantly respawned low-level enemies if players stood far enough away. All one needed to do was keep your distance with a scoped weapon and you could scoop up gear from multiple enemies... until today that is. Bungie has finally corrected the exploit with its latest hotfix while offering a tongue-in-cheek explanation of what happened.

"The Hive of the holy 'Treasure Cave' have realized the futility of their endless assault on Skywatch," the patch notes read, "and have retired to lick their wounds and plan their next attack." More specifically, the hotfix notes state that respawn timers for several monster caves were increased to 40 seconds. Previous respawn timers ranged from 6-10 seconds.

Being able to gather a critical mass of loot quickly certainly has its appeal, but endless cave farming wasn't the social experience Bungie had in mind. In a Destiny Dev Note, Bungie explained its decision in more detail, stating that the high efficiencies of cave farming are now being reduced.

"The social experience of a cave farming run is amazing," the note reads, "the herding to get a team of Guardians all behind the line and firing in the right direction, the rush to grab the loot, the scramble when the panic wave starts, the beckoning glow from inside the cave. The speed at which the community organized around this activity was inspiring and humbling to us.

"But shooting at a black hole for hours on end isn't our dream for how Destiny is played," Bungie continues. "Our hope is that social engagement in public spaces is only one part of the Destiny experience. Expect changes soon which decrease the efficiency of cave farming and correspondingly increase engram drops from completing activities."

The change is incredibly significant for Destiny players, but it really shouldn't be too surprising. Players will have to go back to grinding for the Legendary drops they crave, at least until another clever exploit is discovered.