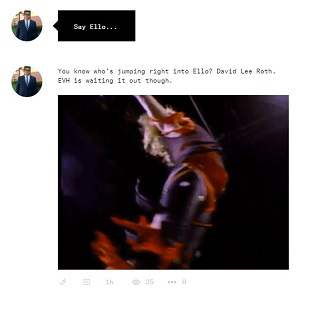 Ello is simple, unfinished, definitely in beta, and wants to be Bizarro Facebook.

If you exist on any level in the GIF-laden Twitterverse, you might have heard about Ello in one way or another over the past week.

Ello is a new social networking service that first popped up in the spring, but didn't garner widespread attention until this month (really only in the last week or two). Its purpose, at least at the moment, is to offer an ad-free alternative to Facebook and Twitter, as it attempts to combine features that draw people to both of those established services.

Despite the chatter (and my headline), Ello strikes me as more of a competitor to Twitter than to Facebook. The friends relationship is one-way, like on Twitter -- you can follow someone, but they don't have to follow you back -- and everything is public, although privacy controls are coming soon. The site's most compelling feature is how it separates the wheat from the chaff. If you want a steady stream of updates on specific people, you add them as friends, while everyone else can be added to the Noise category. Noise breaks down posts from everyone into a bite-size grid, and it's separate from the feed populated by friends, and your own posts.

Ello also tracks how many people have seen your posts (which are editable, by the by), dumping the info next to the comments section beneath a post. If Ello survives beta and goes mainstream, public tracking of how your posts are viewed could become a powerful tool, especially since it's not hidden in some analytics tool somewhere, or governed by likes, favorites, or reposts.

Oh, but the most important feature? Posting GIFs. It's basically all I do on Ello (see: David Lee Roth up top).

Twitter is still finding itself, with promoted posts and a new analytics tool, and Facebook is dealing with a slew of its own problems. From stripping out the Messenger function into its own app, to drawing the ire of the LGBTQ communities, to the videos that automagically play as you scroll by, Facebook is a platform that, even ten years later, is still experiencing growing pains. So if there's a time for a new social network to carve out its own niche, this is probably it.

But what is the endgame here? It's a silly question to ask after only two days of use (for me, anyway), but that seems to be all anyone is talking about. In an interview with Engadget, Ello's founders and their venture capitalist backers aren't crazy about embracing the advertising model, nor do they plan on mining user data anytime soon. Ello does use a version of Google Analytics to track specific user behaviors, but the version of the tool they use anonymizes user IPs. Because of the anonymity, Ello claims the data gathered can help make a better site/product, while making the data useless to anyone interested in advertising.

While potential buyers could change the rules, the revenue model appears to be based on enhanced features, similar to LinkedIn. Engadget's example -- paying money to manage multiple accounts through one login -- would generate cash while keeping advertising away from user's eyes.

There's a lot to uncover with Ello. They champion privacy, but still use cookies for specific tasks. They are shunning advertising, but who knows if users will pay for premium features. And they preach an open, simple interface...that isn't quite done yet. If you enjoy drilling down into a beta, try to secure yourself an invite. Otherwise, it might be best to stay away until some additional features (private messaging, blocking, mobile apps/tweaking) are fleshed out.