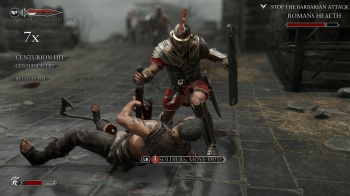 When Ryse: Son of Rome comes to PC this October, it will be sans microtransactions.

Ryse: Son of Rome was one of the more interesting Xbox One launch titles, developed by formerly PC-exclusive dev Crytek, and taking place in, as the title would suggest, ancient Rome. However, it left a bit of a bitter taste in gamers mouths when it was announced that the $59.99 game would contain microtransactions. Thankfully, Crytek has announced that the PC version of the game, due out on October 10, will be coming to the platform sans microtransactions.

In a tiny little afterthought on the page of PC exclusive features for the game lies the phrase "we have also removed the optional microtransactions that were present on the Xbox One." In addition to not having to shell out cash for armor kit "shortcuts," the PC version will feature all four Ryse DLC packs for no additional charge.

Other features players can look forward to for the PC release include 4k resolution support, and vastly more customizable graphical options. Ryse will be a Steam release, and thus will take full advantage of Valve's Steamworks platform, with support for Steam Achievements, Trading Cards, Leaderboards and cloud saving.

Other than that, the PC version of Ryse should be identical to the Xbox One version released earlier in the year.

Ryse was met with pretty lackluster reviews when it first launched, and it didn't help that Crytek alienated its historic PC fanbase by deciding to go Xbox One exclusive. It's hard to tell if this PC re-release is an olive branch, or a move of desperation.