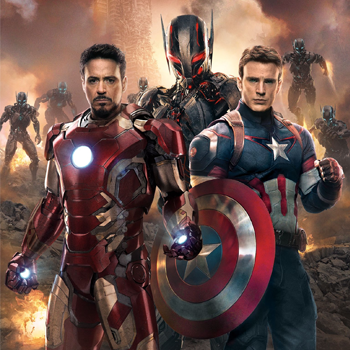 The last time director Christopher Nolan and The Avengers were paired in movie theaters, it was as rivals, with the filmmaker's The Dark Knight Rises and the inaugural adventure of Marvel's superhero team slugging it out over who would be the biggest comic-book movie of 2012. Now, a Russian gossip-site suggests that their next pairing will be as allies.

FilmPro.ru reports that Warner Bros representatives at Russia's Kino Expo 2014 (a trade show exhibition for theater owners and film distributors) said that the first trailer for Avengers: Age of Ultron would be attached to Nolan's November 7th release Interstellar, a big-budget science-fiction drama starring Matthew McConaughey as an engineer who joins a team of astronauts in exploring a wormhole in order to find a new planet to which humans can escape from a dying Earth.

If true, it would mark an unusual (but not unprecedented) alliance between rival studios, as Interstellar is being released by Warner Bros while Age of Ultron is a Disney/Marvel production. Complicating things further is the fact that Disney has a big movie of their own also releasing on November 7th, the animated kid-superhero actioner Big Hero 6, which could conceivably boost its opening box-office significantly by also boasting the first public look at Marvel's next big blockbuster. Cinemablend theorizes that both prospects could be true, with Big Hero 6 getting a conventional trailer while the IMAX-boasting Interstellar could get an IMAX-specific separate trailer.

There has been no comment from either Warner Bros or Disney at this time.